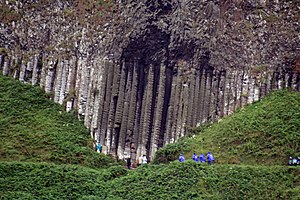 The Giant's Causeway [3] is an area of about 40,000 interlocking basalt columns. The formation is a result of an ancient volcanic eruption. It is in County Antrim on the northeast coast of Northern Ireland. It is a World Heritage Site by UNESCO.[4] It was named a National Nature Reserve in 1987 by the Department of the Environment for Northern Ireland. In a 2005 poll of Radio Times readers, the Giant's Causeway was named as the fourth greatest natural wonder in the United Kingdom.[5]

The tops of the columns form stepping stones that lead from the cliff foot and disappear under the sea. Most of the columns are hexagonal, although there are also some with four, five, seven and eight sides. The tallest are about 12 metres (36 ft) high, and the solidified lava in the cliffs is 28 metres thick in places.

The Giant's Causeway is today owned and managed by the National Trust. It is the most popular tourist attraction in Northern Ireland.[6]

The Giant's Causeway and Fingal's Cave are part of the same volcanic eruption. They were separated by the plate tectonics movements which happened when the supercontinent Pangaea broke up.

During the Palaeogene period, some 50 to 60 million years ago,[7] Antrim was subject to intense volcanic activity. Highly fluid molten basalt intruded through chalk beds to form a large scale lava plateau. As the lava cooled rapidly, contraction occurred. The size of the columns is mostly determined by the speed at which lava from a volcanic eruption cools.[8] The extensive fracture network produced the distinctive columns seen today. The basalts were originally part of a great volcanic plateau called the Thulean Plateau which formed during the Paleogene period.[9] Parts of this plateau can be found in the Faroe Islands, Iceland, and Norway, as well as at Fingal's Cave.