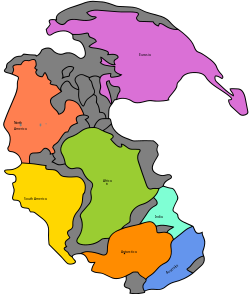 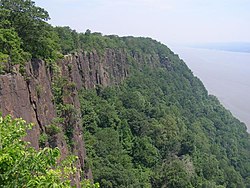 The Palisades Sill as seen from the Palisades Interstate Parkway. The Hudson River is the background. The formation was caused by the rifting of Pangaea in the Triassic 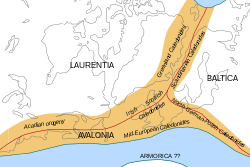 Pangaea [2] was the global supercontinent which formed in the Palaeozoic era. The process started about 450 million years ago (mya) and was complete by 210 mya.

Pangea was the latest of a series of global supercontinents. They formed at various times since plate tectonics began on Earth.Generally Pangea and Gondwana are considered as parts of the same supercontinent Gondwana-Pangea.(Reference -https://www.researchgate.net/publication/286392394_Earth_as_an_Evolving_Planetary_System).

The collisions between continental plates formed the greatest mountain ranges in the history of the Phanerozoic eon.[3] The mountain building included the Caledonian orogeny, the Alleghenian orogeny and the Variscan orogeny. The low mountains of Scotland, Scandinavia and eastern North America are the ground-down remains of these vast events.[4]

There were three major phases in the break-up of Pangaea. Actually, the first signs of rifting came in the Triassic before Pangaea was completely formed.[5]

Pangaea broke up about 180/200 million years ago, in the early middle Jurassic. It broke into supercontinents Laurasia and Gondwana before each of these broke into the current continents. One rift resulted in a new ocean, the North Atlantic Ocean.[6]

The second major phase in the break-up of Pangaea began in the Lower Cretaceous (150–140 Ma), when Gondwana separated into multiple continents (Africa, South America, India, Antarctica, and Australia).[6]

The third major and final phase of the break-up of Pangaea occurred in the early Cenozoic (Paleocene to Oligocene). Laurasia split when North America/Greenland (also called Laurentia) broke free from Eurasia, opening the Norwegian Sea about 60–55 Ma. The Atlantic and Indian Oceans continued to expand, closing the Tethys Ocean.

The break-up of Pangaea continues today in the Great Rift Valley in East Africa and Arabia.