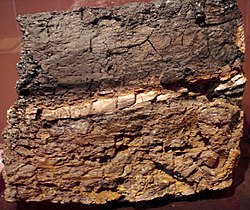 The K/T boundary. The intermediate claystone layer contains 1000 times more iridium than the upper and lower layers. It is the boundary between Cretaceous and Tertiary Periods. The rock is from Wyoming, USA.

The Cainozoic (Cenozoic) is the current geological era. It began 66 million years ago and continues today. Before it was the Mesozoic.

During the Cainozoic the continents moved into their present positions. The climate started warm, but cooling continued steadily. Finally ice ages occurred.

The word Cainozoic is derived from Greek kainos = "new", and zoe = "life". 'Cainozoic' may be spelled 'Cenozoic'. It has three periods, and the periods are split into stages.

Previously, what is now the Cainozoic was divided into two periods, the Tertiary and the Quaternary. The Tertiary corresponded to the Palaeogene+Neogene. Now, the term 'Tertiary' is not used. Officially, it is 'deprecated'.

On land, the Cainozoic is the era of mammals, and of birds and flowering plants. Grassland became a major habitat. Aquatic mammals took over the roles of predatory reptiles like the mosasaurs and plesiosaurs. As a result, the ecological landscape of the Cainozoic has become quite different from the Mesozoic.[1]