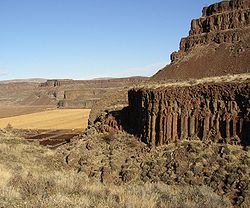 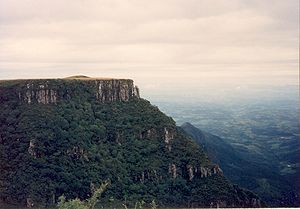 A cliff at the Paraná Magmatic Province, Brazil. Part of a huge lava flow 128 to 138 million years ago. Parts of this event can be seen in the Etendeka traps in Namibia and Angola. These areas were touching in Pangaea

A flood basalt or trap basalt is the result of a giant volcanic eruption or series of eruptions that coats large stretches of land or the ocean floor with basalt lava.

Flood basalts have covered areas as large as a continent in prehistory, creating great plateaus and mountain ranges. Flood basalts have erupted at various times throughout Earth history. They are clear evidence that the Earth has periods of higher activity rather than being in a uniform steady state.[1]

One explanation for flood basalts is that they are caused by the combination of continental rifting and its associated melting. Then a mantle plume produces vast quantities of a basaltic magma. These have a low viscosity, which is why they 'flood' rather than form taller volcanoes.

Flood basalts start at between 100 and 400 km depth, in the asthenosphere. To get a partial melting as large as that of the traps, expelling huge quantities of lava, it is necessary to have a large heat input. Such melting can take place near a hotspot, resulting in a mixture of magma from the depths of the hotspot with superficial magma produced by a mantle plume.

A lava plateau is a flat, wide surface (plateau) that is formed when lava comes out of the ground and spreads out very quickly. The layers of lava can build up over time to form a lava plateau. Here are the general properties of lava plateaux:

The Emeishan Traps in southwestern China, around Sichuan province, the Deccan Traps of central India, the Siberian Traps, and the Columbia River Plateau of western North America are four large regions covered by prehistoric flood basalts. The two largest flood basalt events in historic time have been at Eldgjá and Lakagigar, both in Iceland. The largest and best-preserved continental flood basalt terrain on Earth is part of the Mackenzie Large Igneous Province in Canada.[2] The maria on the Moon are additional, even more extensive, flood basalts. Flood basalts on the ocean floor produce oceanic plateaus.

Another example of a lava plateau is the Giant's Causeway, in County Antrim, Northern Ireland. This is was originally part of a great volcanic plateau called the Thulean Plateau.