A sine wave, with its wavelength 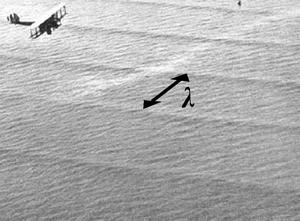 A wavelength is the length of the shortest repeating part of a "sine wave". All waves can be formed by adding up sine waves. That is, every wave is a total of sine waves, which may be identified by Fourier analysis.

Waves are everywhere. Examples of waves include:

"Length" of a sine wave

There are other properties of waves and sine waves, such as their frequency, amplitude, phase, and speed.

A symbol used for wavelength most often is the Greek letter lambda (λ).