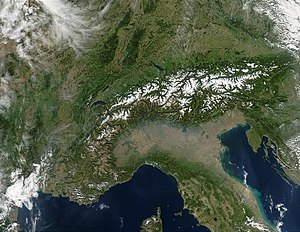 A satellite view of the Alps, a mountain range in Europe 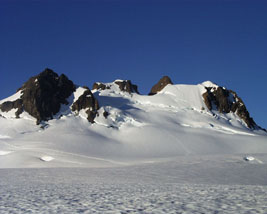 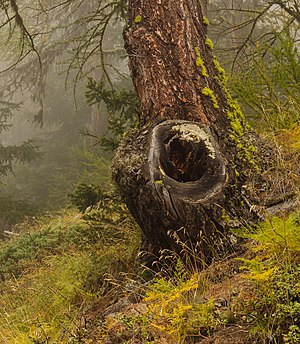 This tree is brown with moss 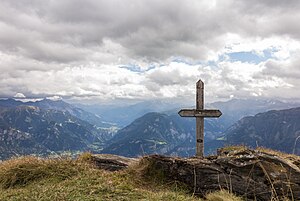 Cross on a Swiss mountain 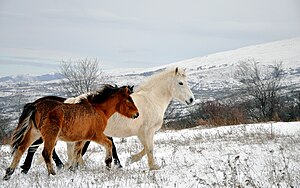 A mountain is a large natural rise of the Earth's surface that usually has a "summit" (the name for a mountain's top, which can also be called a peak). It is usually steeper and taller than a hill. Mountains are often thought of as being a hill which is larger than 600 metres (about 2,000 feet). However, some definitions say a mountain is a hill larger than 300 metres (about 1,000 feet).

Definition of a mountain

The forming of a mountain is called orogeny. Mountains are formed when rock layers in the ground are pushed from opposite sides, and by being pushed, they push the crust up. A mountain range is a large group of mountains beside each other. There are three main ways a mountain may be made:

Folded mountains make up some of the highest mountains in the world. Folded mountains commonly form along boundaries, where 2 continents meet. Some really complex folds are in parts of the Andes, Alps, Himalayas, Appalachians, and Russia's Ural Mountains. These long mountain chains also show lots of signs of folding.

Block mountains are caused by faults in the crust: a seam where rocks can move past each other. When rocks on one side of a fault rise relative to the other, it can form a mountain.[5] The uplifted blocks are block mountains or horsts. The dropped blocks are called graben. They can form extensive rift valley systems. This form of landscape can be seen in East Africa, the Vosges, the Basin and Range province of Western North America and the Rhine valley. These areas often occur when the regional stress is extensional and the crust is thinned.

Volcanoes are formed in one of these ways:

Examples of volcanoes include Mount Fuji in Japan and Mount Pinatubo in the Philippines. The magma does not have to reach the surface in order to create a mountain: magma that solidifies below ground can still form dome mountains, such as Navajo Mountain in the states of Utah and Arizona, in the United States.

Other volcanic mountains form over hot spots, pockets of magma beneath the crust which erupt onto Earth's surface. The Hawaiian Islands are the tops of really high volcanic islands that have formed over a hot spot on the sea floor. The main Hawaiian island is a volcano about 98 kilometres (322,000 ft) above the ocean floor. Its base is about 680 kilometres (2,230,000 ft) wide. Almost 48 kilometres (157,000 ft) of this island is above sea level.

Dome mountains, like those in the Black Hills of South Dakota and the Adirondack Mountains of New York, are an unusual domish type of mountain that is formed when molten rock rises through the crust and push up the rock layers above it. This creates a circular dome on the Earth's surface. The molten rock later cools off and forms hardened rock. When the pushed up rocks are worn away, the hardened rock is shown. This hardened rock then wears away in places. When it wears away, it leaves mountains, and they are called dome mountains.

Plateau mountains are formed a bit like folded mountains. They are large areas of flat topped rocks that have been lifted high above the crust by continental plates. Most plateaus are near folded mountains.

The height of a mountain is measured as distance above sea level.

The highest known mountain in the Solar System is the Olympus Mons (27 km high) on Mars. The highest mountain on earth is Mount Everest (8,848m) which is in Nepal and Tibet, in Asia.