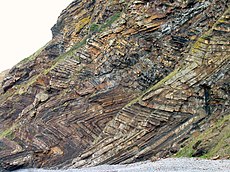 Even when mountains are worn down, the evidence is there in the remaining rocks. Millook, Cornwall 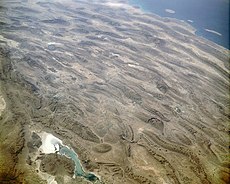 Fold mountains are mountains formed mainly by the effects of folding on layers in the upper part of the Earth's crust. The term is rather out of date, though still fairly common in physical geography literature.

In the time before plate tectonics became well understood, the term was used for mountain belts, such as the Himalayas. These mountain ranges are not caused by the folding of the earth's crust. The main mechanism causing a thickening of the crust at these sites of continent-continent collision along boundary is thrust faulting.

Fold mountains are formed when two tectonic plates move together (a convergent plate boundary). Fold mountains are usually formed from sedimentary rocks which accumulated along the margins of continents. When plates and the continents riding on them collide, the accumulated layers of rock may crumple and fold like a tablecloth that is pushed across a table, particularly if there is a mechanically weak basal layer such as salt.[1]