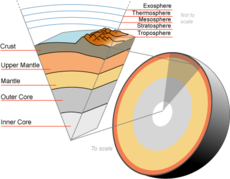 Earth cutaway from the core to the exosphere

The Earth's crust is the Earth's hard outer layer. It is less than 1% of Earth's volume. The crust is made up of different types of rocks: igneous, metamorphic, and sedimentary rocks.

Below the crust is the mantle. The crust and the upper mantle make up the lithosphere. The lithosphere is broken up into tectonic plates that can move.

The temperature of the crust increases with depth because of geothermal energy. Where the crust meets the mantle the temperatures can be between 200 °C (392 °F) to 400 °C (752 °F).[1] The crust is the coldest layer because it is exposed to the atmosphere.

Igneous rocks make up over 90% of Earth's crust by volume.[2]p47 This is not noticeable because they are mostly covered by sedimentary and metamorphic rocks.

A single family of silicates, the feldspars, account for about half of the material in the crust (60% by weight), and quartz is a sizeable proportion of the rest. Other common minerals are mica and hornblende.

Only 8% of Earth's crust is non-silicate minerals, and this includes carbonates, sulfides, chlorides and oxides.

Formation of the crust

Earth's mantle and crust formed about 100 million years after the formation of the planet, about 4.6 billion years ago. At first the crust was very thin, and was probably changed often as the tectonic plates shifted around a lot more than they do now. The crust would have been destroyed many times by asteroids hitting Earth, which was much more common in the Late Heavy Bombardment.

The average age of Earth's continental crust is about 2.0 billion years.[5] Most crustal rocks formed before 2.5 billion years ago are in cratons. Such old continental crust and the mantle below it are less dense than other places in the Earth. These are not easily destroyed when the plates shift. The making of new continental crust is linked to times of major orogeny or mountain building. This happens at the same time as the formation of the supercontinents such as Rodinia, Pangaea and Gondwana. The crust forms in part by the coming together of island arcs including granite and metamorphic fold belts. They are kept together partly by the subduction of the mantle below the crust, which makes a mantle on which the crust can float.