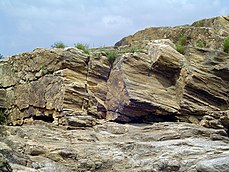 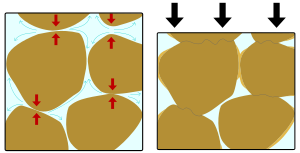 Pressure solution at work in a clastic rock. While material dissolves at places where grains are in contact, material crystallizes from the solution (as cement) in open pore spaces. This means there is a net flow of material from areas under high stress to those under low stress. As a result, the rock becomes more compact and harder. Loose sand can become sandstone in this way. 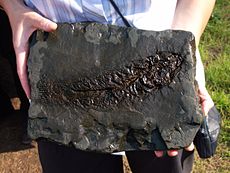 Sedimentary rocks are rocks formed from sediment. They are deposited over time, and often show layers which can be seen in cliffs. Other types of rock are igneous rock and metamorphic rock.

Sediments are usually formed from matter which falls to the bottom of oceans and lakes. The matter includes tiny pieces of other rocks, and dead animals, plants and microorganisms. Also, inorganic chemicals may be precipitated from solution in the water.

Squeezed and compressed over time, the sediments become 'consolidated' (made solid) into layers of rock.

Cementation occurs when dissolved mineral components deposit in the interstices of sediments. It is the sticking together of sediment that forms a rock.

Otherwise, rocks may have the water squeezed out, yet remain for long periods with their character unchanged. There are many quarries of unconsolidated deposits where sand and pebbles are removed for the construction industry. Such quarries may be taking out sand which has lasted as sand since the Jurassic period. But consolidated sand, sandstone, can be a very hard rock.

Consolidated rocks may be changed some more, by water seeping through, or by heat and extreme pressure.

Sediments are formed by three processes:

Chalk, limestone, and dolomite are all basically made from calcium carbonate. This comes from a mixture of minerals and pieces of animals (especially animal shells). They are mostly formed in oceans. Shales, sandstones, and conglomerates are all clastic rocks. They are made from pieces of other rocks.[1] The pieces may have come from erosion by water, ice or wind. Coal is made from ancient plants; oil and natural gas is also organic in origin.

Sedimentary rocks may be found anywhere on Earth. When sedimentary rocks are heated and squeezed, they become metamorphic rocks. Igneous rocks have a volcanic origin. Over a very long time, rocks get recycled, in two ways. When marine sediments are raised above sea level, they get weathered, and the pieces carried down to the sea. On a much longer time-scale continental plates may collide. Then one plate goes under the other (is subducted), and all its material is recycled, emerging much later.