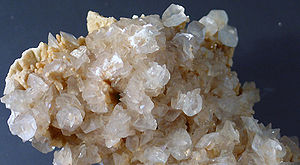 Dolomite is the name of a sedimentary carbonate rock and a mineral, both composed of calcium magnesium carbonate CaMg(CO3)2 found in crystals.

Dolomite rock (also 'dolostone') is composed predominantly of the mineral dolomite. Limestone that is partially replaced by dolomite is referred to as dolomitic limestone, or in old U.S. geologic literature as magnesian limestone. Dolomite was first described in 1791 for exposures in what are now known as the Dolomite Alps of northern Italy.