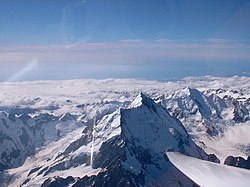 Mount Cook, New Zealand. It lies in the Southern Alps, the mountain range which runs the length of the South Island. New Zealand sits on top of the junction of two oceanic plates. 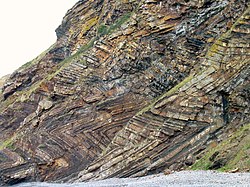 Even when mountains are worn down, the evidence is there in the remaining rocks. Millook, Cornwall

Orogeny is the process of mountain-building. It takes place when two tectonic plates come together. Orogens develop while a continental plate is crumpled and thickened to form mountain ranges, and involve a great range of geological processes collectively called orogenesis.[1][2]

A convergent boundary is a frequent cause:

Another, less common cause is when a plate moves over a hot spot in the Earth's mantle. Examples:

Areas that are rifting apart, such as mid-ocean ridges and the East African Rift have mountains due to thermal buoyancy caused by the hot mantle underneath them, which pushes them up. This thermal buoyancy is known as dynamic topography. Examples: