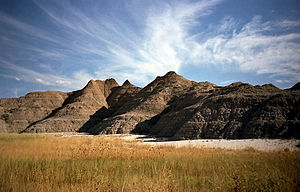 The Black Hills are a small mountain range from the Great Plains of North America in South Dakota.

In 1868, the U.S. government signed the Fort Laramie Treaty of 1868. This exempted the Black Hills from all white settlement forever.

But, when European Americans discovered gold there in 1874, miners swept into the area in a gold rush. The US government reassigned the Lakota, against their wishes, to other reservations in western South Dakota. Unlike most of South Dakota, the Black Hills were settled by European Americans from population centers to the west and south. Miners flocked there from earlier gold boom places in Colorado and Montana.

As the economy shifted from mining and logging, the tourism industry has grown. The Black Hills have two areas: "The Southern Hills" and "The Northern Hills". The Southern Hills is home to Mount Rushmore National Memorial, Wind Cave National Park, Jewel Cave National Monument, Harney Peak (the highest point in the United States east of the Rockies), Custer State Park (the largest state park in South Dakota, and one of the largest in the US), the Crazy Horse Memorial (the largest sculpture in the world), and the Mammoth Site in Hot Springs, the world’s largest mammoth research facility.