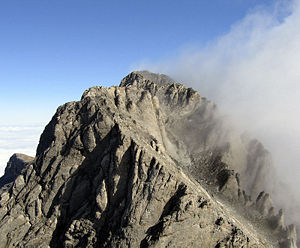 Mount Olympus (Greek: ΌλυμποςLua error in package.lua at line 80: module 'Module:Category handler/data' not found.; also transliterated as Ólympos, and on Greek maps, Óros Ólimbos) is the highest mountain in Greece. It is 2,919 metres (9,577 feet) high.[1] Since its base is at sea level, it is one of the highest mountains in Europe in terms of topographic prominence, the relative altitude from base to top.

In Greek mythology the mountain was regarded as the "Home of the Gods", specifically of the Dodekatheon, the twelve principal gods of the ancient Hellenistic world.[2]