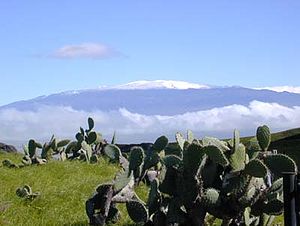 Mauna Kea on the Big Island of Hawaii with a light dusting of snow. Viewed from Kohala Mountain

Mauna Kea is a dormant volcano in the Hawaiian Islands. It is the highest point in Hawaii at 4,205 meters. If measured from top to bottom, below sea level, it is 10,200 meters high and would be the tallest mountain in the world. It is around 1,000,000 years old. Mauna Kea means 'white mountain' because in winter it often has snow at the summit.

High altitude is important because atmosphere causes an effect called seeing, which limits the quality of images by blurring them. At high altitude, there is less atmosphere between the observatories and space and this lessens the effect.