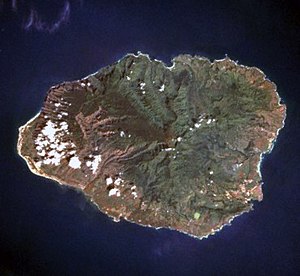 Kauai seen from a top-down view

Kauai (Kaua'i in Hawaiian) is the second oldest (after Ni'ihau) and fourth largest of the main Hawaiian Islands, in the United States. Known also as the "Garden Isle", Kaua'i lies 73 miles (117 kilometers) across the Kauai Channel, northwest of Honolulu on Oahu. It is of volcanic origin. The highest point on the island is Kawaikini. It is located 5,243 feet (1,598 m) above sea level. The wettest spot on Earth, with average rainfall of 460 inches (12,000 mm) a year, is just east of Mount Waialeale. The high yearly rainfall has eroded deep valleys and canyons in the central mountain. The waterfalls that have been created by erosion in canyons are now popular tourist spots.

The island of Kauai was featured in Disney's 2002 animated feature film Lilo & Stitch.

Lihue Airport is the only commercial airport on the island. There are two other general aviation airports on the island: Port Allen Airport, and Princeville Airport.