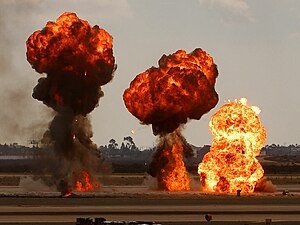 Three explosions happening as the photograph is taken

An explosion is a fast increase in volume and increase in energy made available. It normally makes high temperatures and makes gases.

Elements of an explosion

Unintentional explosions can be caused when chemicals are mixed together, or if pressurized containers or flammable materials are heated or exposed to flames. To cause an explosion, pressure does not have to be present but is always a result of an explosion.

There are a number of safety measures that are used to prevent unintentional explosions. Many countries require that chemicals, fuels, and pressurized containers that may explode be labelled with warning labels. As well, many countries have regulations restricting the possession and use of potentially explosive chemicals to appropriate industrial and research uses. Many countries have transportation regulations that require potentially explosive chemicals, fuels, and pressurized containers to be transported safely.

Making up an intentional explosion is called demolition. They are used to break up old and obsolete buildings and bridges, and to break rock and stone for construction.