Wars of the Roses

See also: War of the Roses

The wars began for several reasons, and historians have debated the one that was most important. King Henry VI was seen as a poor ruler by many of his people because of his lack of interest in politics and his mental illness (his French queen, Margaret of Anjou, often made key decisions instead). Also, England's defeat in the Hundred Years' War in France, money problems after the war and problems with the feudal system of government were other causes.

The name of the Wars of the Roses, which was first used only in the 19th century, comes from the white rose symbol for the House of York and the red rose symbol for the House of Lancaster. However, the red rose symbol was not used until after the wars had ended, and most soldiers fought under the symbol of their local nobleman. At the time, they were called the "Civil Wars". The houses were named after the cities of Lancaster and York, but neither city played a big role during the war, and both houses owned land all over England and Wales.

King Edward III had many sons, as is shown in the family tree below. His oldest son, known by his nickname "The Black Prince" died first, and the throne passed to the Black Prince's son, Richard, who became King Richard II of England in 1377 although he was only ten. He grew up to be a weak and unpopular king, and one of his actions was to send his cousin Henry into exile.

Henry later returned while Richard was away in Ireland and took over the country. When Richard returned, Henry tricked him into giving himself up. Richard was put into prison, where he died, and Henry became King Henry IV of England.

Henry VI was considered a poor ruler by some of his people for several reasons. He was not interested in politics. He was shy and did not like war. He was easily led by a small number of friends, such as his French queen Margaret of Anjou and his advisor Edmund Beaufort, Duke of Somerset.

Henry VI's reign also saw England's defeat in the Hundred Year's War. England had done well in the war while he was still a child, and by 1428, they English appeared to be close to defeating their House of Valois enemies. However, Joan of Arc's rebellions in 1429-1430 was one reason for Burgundy's decision to switch sides in 1435. Several other problems made England's control in France to be already weakened when Henry VI started to run the government in 1437.

Henry VI tried to end the war by agreeing negotiating peace, but his French enemies realised thar they could win a complete victory. In 1453, England had lost its last lands in France outside Calais.

Also in 1453, Henry VI was for the first time overcome with mental illness and could not run the country. A powerful nobleman called Richard, Duke of York persuaded the other nobles to make him "Lord Protector". That meant that he would run the country until the king recovered.

While York ran the country, he locked his enemy Somerset in the Tower of London. Henry recovered in 1454 and began to run the country again. He let Somerset out and gave him back his position. York and his supporters then became afraid that the king and Somerset would have them executed. 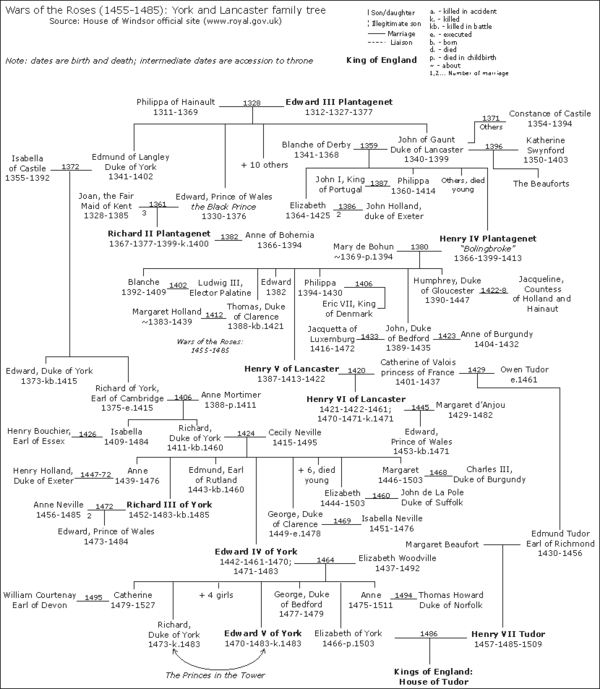 York decided that he could protect himself was only by defeating the king in battle. He raised an army of many people who were unhappy with Henry and Margaret, which led to the First Battle of St Albans in 1455. That was the first to be fought between the Yorkists, who supported York, and the Lancastrians (who supported Henry). York won with the help of the Richard Neville, Earl of Warwick. Henry was found hiding in a leather shop, taken prisoner and was again overcome with mental illness. Somerset and some of the king's other key supporters were killed in the battle. York was again made Lord Protector.

The next year, Henry recovered. York let him go back to running the country and was put in charge of running Ireland. Henry and Margaret knew that they could not get rid of Richard easily. For the next few years, both sides wanted to stop a war from breaking out but could not agree on several things. York wanted to be the next king after Henry died, rather than Henry and Margaret's newborn son, Edward. Margaret would not allow that and so Henry moved to Coventry, where he had more support.

A more serious war broke out in 1459 and started because Warwick had attacked other country's ships during his time in charge of Calais. Henry asked Warwick to meet to explain what he doing, but Warwick refused.[1][2] Soon enough, York and Warwick started putting together an army. They were stopped at the Battle of Ludford Bridge and fled England. Henry and the Lancastrians now had control. They ordered that York and Warwick were to be executed if they were found.

The peace did not last long. York and Warwick returned and raised an army and won the Battle of Northampton. For the second time, Henry was captured after he was overcome with mental illness. York was made Lord Protector for the third time.

York then announced that he wanted to take the throne for himself. Many of his supporters thought that was a step too far and so thet agreed that Henry would still be king, but York, not Henry's son, would be the next king.

York then travelled to the north of England to attack the remaining Lancastrians. That led to a disaster, and York lost the Battle of Wakefield at the end of 1460 and was killed. His son Edward the became leader of the Yorkists. The next year saw mixed results for both sides. Edward defeated a Lancastrian army at the Battle of Mortimer's Cross, but the Lancastrians won the Second Battle of St Albans where Henry escaped. In London, Edward was met with a lot of support, announced that he wanted to take the throne ans defeated the Lancastrians at the Battle of Towton. That was the bloodiest battle that was ever fought on British soil.

After Towton, Edward was in control of England and was crowned as Edward IV in June 1461. Over the next few years, he and his allies put down small Lancastrian rebellions. Henry was again captured in 1465.

Fighting broke out again in 1469 when Edward's most powerful supporter, the Earl of Warwick, switched sides. Warwick was furious that Edward had married Elizabeth Woodville, a common woman. Many people also thought that was wrong since kings were then expected to marry the daughters of noblemen or other kings. Warwick led a rebellion against the king. The country was left in confusion. At one point Warwick captured Edward and so he had captured two kings.

Warwick soon let Edward go and then supported making Henry king again. Warwick believed that he could run the country while Henry was on the throne. He also arranged for Henry's son to marry Warwick's daughter Anne Neville. Edward could not raise an army to fight and so he fled the country in 1470. Henry VI then became the ruler again. Warwick's role in bringing Edward and then Henry to power led to him being nicknamed "Kingmaker".

Henry's return did not last long. Warwick planned to help France invade Burgundy, which helped Edward find soldiers. Edward returned in 1471 and won two grear victories over the Lancastrians. The first was the Battle of Barnet in which Warwick was killed. The second was the Battle of Tewksbury in which Margaret was taken prisoner and her son was killed.

Edward IV took the throne again and Henry VI was imprisoned in the Tower of London. He died one month later, and historians think Edward had him murdered since that left the Lancastrians without a leader.

There was little fighting for the next 12 years. Margaret was released in 1475, went back to France and died in 1482.

Edward IV ruled until his sudden death in 1483. Just before dying, Edward had said that his 12-year-old son should become king as Edward V, and Edward's brother Richard would be "Lord Protector". Richard would run the country until Edward V became an adult.

Edward V was the king for 78 days before Richard took the throne for himself. He was crowned as Richard III. The young Edward and his brother disappeared a few months later while they were living in the Tower of London. Many people thought Richard had ordered the boys to be killed, and some historians agree. That caused many Yorkists to turn against Richard III.

Richard managed to win against a rebellion by his old friend, the Duke of Buckingham. Henry Tudor, a distant relative of Henry VI who returned to England, became the leader of the rebellions and created a new Lancastrian army. In the Battle of Bosworth Field, Richard III was killed, and his army was defeated. Henry took the throne as King Henry VII, the first king of the House of Tudor.

The Battle of Bosworth Field is often seen as the end of the war. However, there was another great battle two years later, but Henry VII stopped a rebellion and brought peace to the country.

Henry told people that he was bringing the two houses together. Thar made him marry Edward IV's daughter Elizabeth of York. He also started the Tudor rose symbol, with a red rose and white rose joined.