The Middle Ages were a period of about a thousand years in European history. They started around the year 476 CE, when the Western Roman Empire ended,[1] and continued until around the time Christopher Columbus arrived in the New World in 1492. This period of time is called the 'Middle Ages' because it took place between the fall of Imperial Rome and the beginning of early modern Europe. It is often separated into the Early Middle Ages, the High Middle Ages, and the Late Middle Ages.

Sometimes people use other names, like “the Medieval Age,” to describe the Middle Ages. Another name for the Middle Ages is “the Age of Faith,” because Christianity and Islam were becoming much more popular. The early Middle Ages has also been called “the Dark Ages” because past scholars wrongly believed that there was very little culture, good literature, or art, or progress during this period.

Very few people in the Middle Ages could read, so there are not many records from this period. Because of this, historians do not know as much about the Middle Ages as about earlier times.

During the Middle Ages, many people’s lives were short, difficult, and poor. The fall of the Roman Empire, and the invasions of barbarian tribes, devastated Europe. The Romans had made a lot of progress in science, technology, engineering, medicine, and literature. During the Middle Ages, a lot of this new knowledge was lost. There were mass migrations, wars, and plagues. For around 300 years, there was continuous violence. After that, the development of feudalism decreased some of the violence.

In 800 ce, Charlemagne became Emperor of the Romans. He promoted order, education, and civilization. Slowly, Europe began to regain what it had lost. Still, the Late Middle Ages were a difficult time. Wars and the Bubonic Plague killed millions of people in Europe and Asia.

Byzantium: The eastern side of Rome 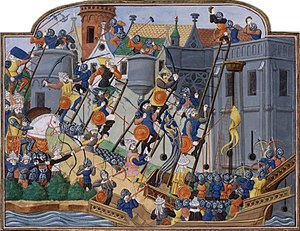 In 330 AD, the Roman Emperor Constantine created the Byzantine Empire (also called the Eastern Roman Empire). He made the capital city Constantinople. The Byzantine Empire controlled Asia Minor and Northern Africa, and sometimes southern Spain and southern Italy. However, its lands were slowly eaten away by enemies like the Turks and the Franks.

The fall of Constantinople to the Ottoman Turks is sometimes called the end of the Middle Ages.

The Islamic prophet Muhammad founded Islam in the early 7th century. Soon after his death in 632 CE, Islam split into two branches. These were the Sunni Muslims and the Shi'a. Most Muslims (about 85%) are Sunni. Shi'a Muslims live mostly in modern-day Iran and Iraq. The Sunni-Shi'a split has been compared to the Protestant Reformation within the Christian Church much later, in 1517.

After the Prophet Muhammad’s death, Arab Muslims began to take over many Christian territories and convert them to Islam. Over time, they took control of modern-day Iraq, Syria, Egypt, North Africa and Spain. (France and other European countries stayed under Christian rule.) Eventually, the Muslim Ottoman Empire conquered parts of eastern Europe too. Many Muslim states held of vast areas of land, making them superpowers of the Middle Ages. Islam spread along the major trade routes of the old world. Many traders and travelers became Muslim.

The Middle Ages were a golden age of knowledge in Muslim territories. While Europe was struggling greatly, the Islamic world was making great progress in the arts, agriculture, economics, industry, law, literature, navigation, philosophy, sciences, and technology. Many Muslim caliphs and Sultans gathered the ancient texts of great classical empires. (For example, the Caliphs of Andalusian Cordoba gathered ancient Roman texts, and the Anatolian Seljuk Sultans gathered ancient Greek texts.). During this Islamic Golden Age, a Persian Muslim helped to develop algebra.

The golden age of Islam ended with the Mongol invasions in the mid-13th century. [2]

Items that were light, easy to carry, and valuable traveled the furthest distances. During the high Middle Ages, wealth began to return and consumers began to demand luxuries again. Traders brought silk, porcelain, spices, incense, gold and gems thousands of miles across deserts, mountains and plains to reach Europe. They also brought glass from Europe to Asia.

Not all items traveled along the entire Silk Road. Traders carrying heavier, less valuable items would travel shorter distances. Food, for example, would mostly travel only within a few villages.

Trade was greatly interrupted several times during the Crusades (1095-1291) due to Mongolian invasions, wars between Muslims and Christians, and (later) the Black Plague. Histories think the Mongols brought the plague with them from Asia. This disease devastated the world population from 1347-1351. It killed almost a third of the world's population (although the Americas were not affected).

Buddhism is a non-theistic religion (meaning its followers do not believe in a god). It is based on philosophy. It began in India. However, Muslim invaders drove Buddhism out of India. This forced Buddhism to flee east. There are very few Buddhists in India today, but Buddhism eventually took up strong roots in China.

During the Middle Ages, the Mongols created the world's largest contiguous empire. Under the leadership of Genghis Khan, the Mongols took over territories in much of Asia, the Middle East, and far eastern Europe. Because the Mongol Empire was so large and powerful, there was little war within the empire. This period is now called the Pax Mongolica (pax is Latin for “peace”). Like the earlier Roman Pax Romana, the Pax Mongolica was a time of relative peace and stability. This made it possible for trade, technologies, and ideas to travel safely throughout Eurasia. International trade and diplomacy along the Silk Road expanded greatly.

Around the time of his death in 1227, Genghis Khan’s empire had gotten too big to survive. It collapsed under its own size (like Alexander the Great's did in Ancient Greece). The former Mongol Empire was split four ways. This allowed the Chinese to become the dominant power in the Far East once again. Later, under the Yuan Dynasty, the Chinese also retook control of northern China.

Around 1405, a Chinese admiral named Zheng He went to explore the world. His fleet of 300 'treasure ships' explored great areas of the Eastern world. These ships were many times larger than anything the Europeans had built. (A Zheng He Treasure ship was wider than Columbus' ship 'Santa Maria' was long).

The Late Middle Ages were the last two centuries of the Middle Ages, from around 1291 (when the Crusades ended) to 1492 (when Columbus traveled to the New World). During this period the gun was invented, and changed the way wars were fought. Aristocracy and feudalism became less important.

Before the late Middle Ages, armies were only formed when there was a war. Now, states founded standing armies. Technology, economy and science developed. Cities were founded and existing cities grew larger and richer.

During the late Middle Ages, France and England fought the Hundred Years' War. Also during this period, China regained its independence from the Mongol Empire. So did the Grand Duchy of Moscow, which became the most important state in Eastern Europe, under the name of “Russia.”

The bubonic plague devastated Eurasia and North Africa during the late Middle Ages. This was one of the deadliest pandemics in history. It killed between 75 and 200 million people. This was 1/3 to 3/4 of the world’s population at the time.

In the 15th century, the Ottoman Turks conquered the Byzantine Empire. This cut off the Silk Road, so Europeans had to find new trade routes. In turn, Christian states drove the Muslims out of Spain. This triggered the Age of Discovery during the Renaissance.