This is a Chinese name; the family name is Zheng. 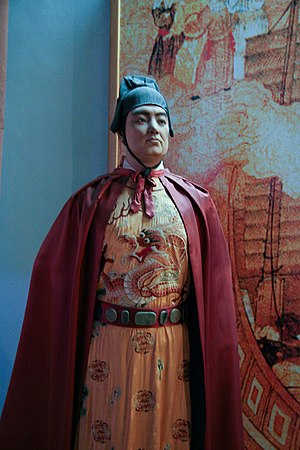 Statue of Zheng He in a museum in China

Zheng He or Ma He (Chinese 郑和; 1371–1433) was an explorer, diplomat, and admiral from China. He lived during the Ming Dynasty. Zheng He was the leader of a very large fleet of ships that traveled all over the Indian Ocean and Southwest Asia. Zheng He was an eunuch of China's Imperial Court. The fleet that Zheng He commanded had 317 ships that were very large. 28,000 Chinese soldiers were on board these ships.

Zheng He was born in Kunyang, a village in Yunnan.[1] He was born with the name Ma He (Chinese 马三宝). He and his family were Muslim.[2] At the time, Yunnan was ruled by Mongols. In 1381, however, a Ming army invaded and took control of the area.[3]

Ma He was taken as a prisoner by the Ming armies. He was about 10 years old.[1] He was castrated and then taken away to serve the Prince, Zhu Di (the future emperor).[4] Ma He became a servant at the Imperial Court. The name Zheng He was given to him by the Prince. He also came to be called "Sanbao", a reference to the Three Jewels of Buddhism.[3]

From 1405 to 1433, Zheng He went on seven journeys to the Indian Ocean, or what the Chinese people called the "Western Ocean". He was the leader of a large fleet of ships and a big army.

In his first three journeys he visited the countries of Southeast Asia, India and Sri Lanka. In his fourth to seventh journeys he went as far as the east African coast. In his journeys he gave the countries he visited gifts of silk, porcelain, gunpowder and other goods. He got lots of unusual gifts as well, including giraffes and zebras. 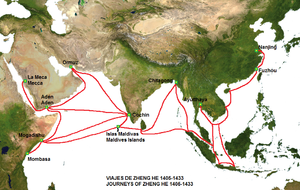 The route of the voyages of Zheng He's fleet.

He had his first journey from 1405–1407, but it is not known why the journey was made. He travelled from the mouth of the Yangtze River to Vietnam, as well as the south of India. His fleet was made up of 317 ships, more than 27,000 men, and the cargo included porcelain, silk, and lacquerware. He used a treasure fleet which is known as the largest wooden ships ever built, being 400 feet (120 m) long, and about 150 feet (46 m) wide. On his first voyage, he defeated a famous pirate in the Strait of Malacca.

Zheng He visited over 30 countries, and is believed to have died in 1433 on the journey home during the final treasure fleet voyage. After Zheng He died at sea in 1433, his treasure fleet quickly faded, even though his voyages had been a success. Less than 100 years after his death, all of the ships from China were destroyed.[4]