Andalusia (Spanish: AndalucíaLua error in package.lua at line 80: module 'Module:Category handler/data' not found.) is the first in population among the 17 Autonomous communities in Spain and the second in area. The territory is divided into eight provinces: Almería, Cádiz, Córdoba, Granada, Huelva, Jaén, Málaga and Seville. Its capital is the city of Seville (Spanish: Sevilla).

Andalusia is in the south of the Iberian peninsula, just to the south of the autonomous communities of Extremadura and Castile-La Mancha; west of the autonomous community of Murcia and the Mediterranean Sea; east of Portugal and the Atlantic Ocean; and north of the Mediterranean Sea and the Strait of Gibraltar. The small British Overseas Territory of Gibraltar shares a land border with the Andalusian province of Cádiz at the eastern end of the Strait of Gibraltar.

Christians in the north waged war for more than seven centuries against the Moors, gradually taking over more and more of the southern areas. This process of war is called the Reconquista (a Spanish and Portuguese word meaning "to conquest again"). In the year 1492 under Spanish Inquisition, King Ferdinand and Queen Isabella of Spain retook the last stronghold in the southern area at Granada. In that same year, the majority Muslim Moors and Sephardi Jews were forced to leave Spain, other who want stay in Andalusia got baptized and became Catholic Christians.

The Andalusian coat of arms shows the figure of Hercules and two lions between the two pillars of Hercules that tradition puts on both sides of the Strait of Gibraltar. The words below read Andalucía por sí, para España y la Humanidad ("Andalusia by herself, for Spain and Humanity"). Over the two columns is an arch in the colors of the flag of Andalusia, with the Latin words Dominator Hercules Fundator.[1]

The official flag of Andalusia has three equal horizontal stripes, colored green, white, and green respectively; the Andalusian coat of arms is on the central stripe. It was approved in a meeting in 1918 of Andalusian nationalists at Ronda, a city in the province of Málaga.[1]

File:Himno de Andalucía.ogg The anthem of Andalusia was composed by José del Castillo Díaz with lyrics by Blas Infante. The music was inspired by Santo Dios, a religious folk song sung at harvest time by peasants.[1]

The national holiday, the Día de Andalucía, is celebrated on 28 February.

The natural limits of Andalusia are: to the south, the Atlantic Ocean and the Mediterranean Sea; to the north, the Sierra Morena, mountain range that separates Andalusia from the autonomous communities of Extremadura and Castilla-La Mancha; to the west is Portugal; and to the east is Murcia.[5] 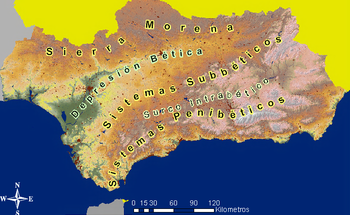 Locations of the principal features of the Andalusian terrain.

Andalusia has the Iberian peninsula's highest mountains and nearly 15 percent of its terrain over 1,000 metres (3,300 ft). The picture is similar for areas under 100 metres (330 ft) (with the Baetic Depression), and for the variety of slopes.

The Atlantic coast is mostly beach and gradually sloping coasts; the Mediterranean coast has many cliffs.[6] These differences divide the region naturally into Upper Andalusia (two mountainous areas) and Lower Andalusia (the broad basin of the Guadalquivir).[7]

The three main geographical regions of Andalusia are: 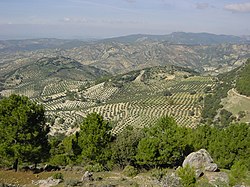 In general, Andalusia has a Mediterranean climate, except in the Valley of Granada (Spanish: Vega de GranadaLua error in package.lua at line 80: module 'Module:Category handler/data' not found.), with occasional heavy rains and extremely hot temperatures.

Rainfall decreases from west to east. The place in Andalusia with the highest rainfall is in the Sierra de Grazalema (2,138 millimetres (84.2 in) per year) and the driest place is Cabo de Gata, the place with the least amount of rainfall in Europe with only 117 millimetres (4.6 in) of rain per year. 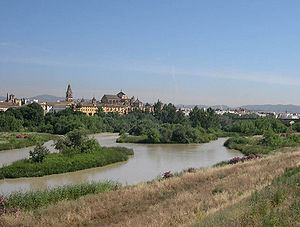 The Guadalquivir as it passes through Córdoba.

The mountain ranges are cooler than the plains and have a higher rainfall with some snow in winter. The Sierra Nevada, above 3,000 m (9,843 ft), is snow covered for most of the year.[10]

Andalusia has rivers that flow into both the Atlantic and the Mediterranean. Flowing to the Atlantic are the Guadiana, Odiel-Tinto, Guadalquivir, Guadalete, and Barbate. Flowing to the Mediterranean are the Guadiaro, Guadalhorce, Guadalmedina, Guadalfeo, Andarax (also known as the Almería) and Almanzora. Of these, the Guadalquivir is the longest in Andalusia and fifth longest on the Iberian peninsula, at 657 kilometres (408 mi).[11]

Andalusia consists of eight provinces. Each of the Andalusian provinces bears the same name as its capital:[12]

The Andalusians are the inhabitants of Andalusia of the southern region in Iberian Peninsula. Traditional male circumcision is usually performed. They are generally considered an ethnically distinct peoples because of the two of the most important markers of distinctiveness: their own language and an awareness of a presumed common origin. Andalusian is said to be a distinct dialect of Spanish, according to the Andalusian nationalism. The Andalusians have a rich culture which includes the famous flamenco style of music and dance, even though it was adopted by the Spanish Caló who have changed it and monopolized into their own culture.