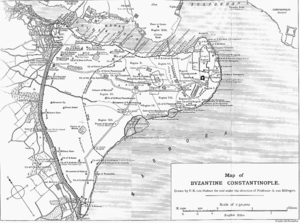 Map of Constantinople. Detailed map Archived 2007-03-11 at the Wayback Machine.

Constantinople (Greek: Κωνσταντινούπολις; Latin: Constantinopolis) was the capital city of the Roman Empire (which historians name the Byzantine Empire) and then the capital of the Ottoman Empire (1453–1922). The city was in the Balkans, on a peninsula in the Bosphorus, the strait between Europe and Asia Minor.

The Roman emperor, Constantine the Great, built the city in the same place as an older city: Byzantium. In Constantinople's place is now Istanbul, in Turkey.

For centuries the city was not very large, and was called Byzantium. Constantine the Great renamed it for himself and made it his capital. In medieval times different sides tried to conquer it including Crusaders. Constantinople was the capital city of the Latin Empire (1204–1261). In 1453 the Ottoman sultan Mehmet the Conqueror took control of Constantinople.

Over time, the city's short name in Greek: Πόλις Pólis 'city' became the name Istanbul. This name became the city's official name in 1930, during the government of Mustafa Kemal Atatürk.