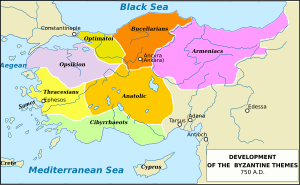 Provinces of the Byzantine Empire in Anatolia, ca 750 AD

Asia Minor, a peninsula also called Anatolia (Turkish: Anadolu), comprises the Asian part of modern Turkey. Asia Minor is 750,000 square kilometers (290,000 square miles). Most of Asia Minor is a plateau averaging 1,000 meters (3,000 feet) above sea level. The climate is continental and semi-arid in the interior, temperate along the north coast, and subtropical along the south and west coasts. Most people there today speak Turkish. The seas surrounding Asia Minor are the Black Sea, the Aegean Sea and the Mediterranean Sea. Because Asia Minor is between Christian Europe and Asia, many different cultures have lived there. Remnants (small parts) of these cultures are there today.

Troy is one of many famous cities that were in Asia Minor long ago.

Help Improve This Page: Please contact us to become an approved KidzSearch editor and provide your credentials. Provide feedback on this article in our Asia Minor Forum