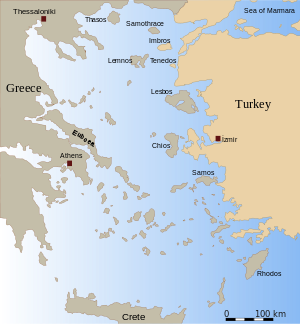 The Aegean Sea is part of the Mediterranean Sea. It is between Greece and Anatolia. It is connected (attached) in the north to the Sea of Marmara and the Black Sea by the Dardanelles and Bosporus. The large islands of Rhodes and Crete mark the south end.[1]

In ancient times two groups of people lived near the sea – the Minoans of Crete, and the Myceneans of the Peloponnese. The city-states of Athens and Sparta came later and were part of Ancient Greece. Persians, Romans, the Byzantine Empire, the Venetians (people from Venice), the Seljuk Empire, and the Ottoman Empire later started around the Aegean Sea. The people near the Aegean were very advanced (powerful and clever) in Ancient history and they sailed across it to talk to each other.

There are seven groups of Aegean islands: the Thracian Sea group, the East Aegean group, the Northern Sporades, the Cyclades, the Saronic Islands (or Argo-Saronic Islands), the Dodecanese and Crete. The word archipelago used to mean these islands. Many of the Aegean islands, or chains of islands, are part of the mountain ranges on the mainland. One chain goes across the sea to Chios, another one goes across Euboea to Samos, and a third one goes across the Peloponnese and Crete to Rhodes. This one divides (splits, cuts) the Aegean from the Mediterranean. Many of the islands have safe harbours and bays, but sailing in the sea is difficult. Many of the islands are volcanos, and marble and iron are mined on other islands. The bigger islands have some green valleys and plains. Two big islands on the Aegean Sea are part of Turkey: Bozcaada (Greek: Τένεδος Tenedos) and Gökçeada (Ίμβρος Imvros).