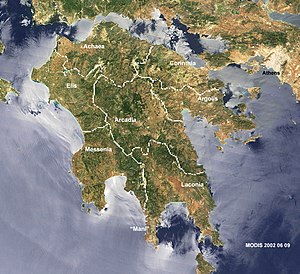 A satellite view of the Peloponnese

The Peloponnese is a large peninsula in Greece. It is the part of Greece which is south of the Isthmus of Corinth.

The Peloponnese has many mountains and a long jagged coastline. The highest part is Mount Taygetus in the south.

There are four south-pointing peninsulas within the Peloponnese. They are called Messenia, the Mani Peninsula, Epidaurus, and the Argolid.

The Peloponnese has had people living on it since prehistoric times. Its name means Island of Pelops. Pelops was a person from Greek mythology, who took over the island. During the Middle Ages and the Ottoman Empire, the peninsula was known as the Morea.