The Crusades were a group of wars over religious views between the Christian and Muslim populations of Europe and West Asia. It started mainly due to a fight for areas thought to be Holy Land. Both Muslims and Christians considered the same lands holy for reasons like Jesus' resurrections and Muhammad visiting there. The eight big crusade expeditions occurred during 1096 to 1291.[1] The Holy Land was still in a place that is very important for the three major monotheistic religions: Islam, Judaism, and Christianity. There are many important religious sites in the Holy Land. This is the land now called Israel. Jerusalem, Nazareth, Bethlehem and other religious sites fell under the control of Muslims during the Caliphate of Omar.

There were many different crusades. The most important and biggest Crusades took place from the 11th century to the 13th century. There were 9 large crusades during this time. They are numbered 1 through 9. There were also many smaller Crusades. Some crusades were even within Europe (for example, in Germany, Austria and Scandinavia). The smaller Crusades continued to the 16th century, until the Renaissance and Reformation.

The word "Crusade" is related to the word "Cross", and means a Christian holy war. There is also the Arabic word "Jihad", which means to strive and struggle by Muslims. All sides (Christians, Muslims, and Jews) believed very much in their religions. They also had political reasons for war.

Alexius I was a ruler of the Byzantine Empire. When Alexius called for help to defend his empire against the Seljuk Turks in 1095, Pope Urban II asked all Christians to join a war against the Turks. The Pope told Christians that fighting the war would repay God for their sins and that if they died on a crusade they would go straight to heaven. The Christian soldiers were called "crusaders". The Christian armies marched to Jerusalem, attacking several cities on their way. In 1099 they won the battle for Jerusalem. As a result of the First Crusade, four crusader states were created. These were the County of Edessa, the Principality of Antioch, the County of Tripoli and the Kingdom of Jerusalem.

After some years of peace, Bernard of Clairvaux called for a new crusade when the town of Edessa was attacked by the Turks. French and German armies marched to the Holy Land in 1147, but were defeated. On the way, the Crusaders helped the Portuguese capture Lisbon from Al-Andalus as part of the Reconquista.​

In 1187, Saladin recaptured Jerusalem.[2] Pope Gregory VIII called for a new crusade, led by several of Europe's kings: Philip II of France, Richard I of England and Frederick I, Holy Roman Emperor. Frederick drowned in Cilicia in 1190. The Crusaders re-established the Kingdom of Jerusalem in Acre. Richard defeated Saladin at Arsuf and Jaffa but lacked the men needed to attempt recapturing Jerusalem. Richard and Saladin made a truce that let the Christians travel safely through Jerusalem. Afterward Richard left in 1192. On Richard's way home, his ship was wrecked, leading him to Austria. In Austria his enemy Duke Leopold captured him, and Richard was ransomed.

The Fourth Crusade was started by Pope Innocent III in 1202, with the idea to attack the Holy Land through Egypt. The Venetians changed this crusade, and went to the Christian city of Constantinople, where they attempted to place a Byzantine exile on the throne. After a series of misunderstandings and outbreaks of violence, the city was sacked in 1204.

The Albigensian Crusade was started in 1209 to eliminate the Cathars of southern France.

The Children's Crusade is a crusade of 1212. An outburst of the old popular enthusiasm led a gathering of children in France and Germany. A boy, from either France or Germany, said that Jesus had visited him, and told him to peacefully convert Muslims to Christianity.[3] Following this vision, many children formed bands, and marched to Italy. There, they were put onto ships which either capsized in a storm, or which went to Morocco. Most of the children either starved to death or were sold into slavery.[4]

In the first movement, Nicholas, a shepherd from Germany, led a group across the Alps and into Italy in the early spring of 1212. About 7,000 arrived in Genoa in late August. However, their plans did not bear fruit when the waters failed to part as promised and the band broke up. Some left for home, others may have gone to Rome, while still others may have travelled down the Rhône to Marseille where they were probably sold into slavery. Few returned home and none reached the Holy Land.

The second movement was led by a "shepherd boy"[3] named Stephen de Cloyes near the village of Châteaudun. In June of that year, the boy said that he had a letter for the king of France from Jesus. He could gather a crowd of over 30,000 and went to Saint-Denis. There he was seen to work miracles. On the orders of Philip II, on the advice of the University of Paris, the crowd was sent home, and most of them went. None of the contemporary sources mentions plans of the crowd to go to Jerusalem. 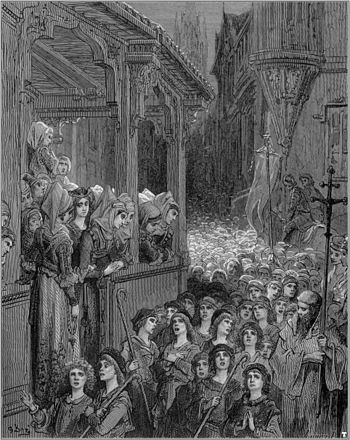 The Children's Crusade, by Gustave Doré

Later chroniclers elaborated on these events. Recent research suggests those taking part were not children, at least not the very young. In the early 1200s, bands of wandering poor started cropping up throughout Europe. These were people displaced by economic changes at the time which forced many poor peasants in northern France and Germany to sell their land. These bands were referred to as pueri (Latin for "boys") in a condescending manner, in much the same way that people from rural areas in the United States are called "country boys."

In 1212, a young French puer named Stephen and a German puer named Nicholas separately began claiming that they had each had similar visions of Jesus. This resulted in these bands of roving poor being united into a religious protest movement which transformed this forced wandering into a religious journey. The pueri marched, following the Cross. They associated themselves with Jesus's biblical journey. This, however, was not a prelude to a holy war.

At that time, chronicles were mostly kept by the Catholic Church. They were written in Latin.

Thirty years later, chroniclers read the accounts of these processions and translated pueri as "children" without understanding the usage. So, the Children's Crusade was born. The resulting story illustrates how ingrained the concept of Crusading was in the people of that time— the chroniclers assumed that the pueri must have been Crusaders. In their innocence, they returned to the foundations of crusading characteristic of Peter the Hermit, and met the same sort of tragic fate.

According to Matthew Paris, one of the leaders of the Children's Crusade became "Le Maître de Hongrie," the leader of the Shepherds' Crusade in 1251.

During 1213, Pope Gregory IX pushed Frederick II into leading the Fifth Crusade. The Church tried another crusade to attack the Holy Land. A crusading force from Hungary, Austria, and Bavaria captured Damietta, a city in Egypt, in 1219. The crusaders had to surrender, due to losing the battle for Cairo.

In 1228, Emperor Frederick II set sail from Brindisi for Syria. He did this after the Pope excommunicated him. By talking to the Turks he had success, and Jerusalem, Nazareth, and Bethlehem was given to the Crusaders for ten years without fighting. This was the first major crusade not initiated by the Papacy, a trend that was to continue for the rest of the century. This crusade only lasted for a year, from 1228-1229.

The Templars argued with Egypt in 1243. In 1244, Egypt attacked Jerusalem. Louis IX of France started a crusade against Egypt from 1248 to 1254. It was a failure, and Louis spent much of the crusade living in the city of Acre. In the midst of this crusade was the first Shepherds' Crusade in 1251.

The Eighth Crusade was organized by Louis IX of France in 1270, to help the Crusader states in Syria.[5] However, the crusade got as far as Tunis, where Louis died a month later.[5]

Before he was the king, Edward I of England started a crusade in 1271. He retired the following year after a truce.

The end of the Crusades

In time, the people went on Crusades for other purposes.[6] The Crusades ended two centuries after they had begun, achieving mixed results.[6] The crusades ended with the Mamluk Fall of Acre in 1291.[7] (the link is not yet started).