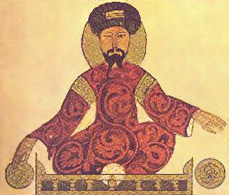 This image, commonly assumed to be Saladin from a 12th century Arabian book, is an illustration of a figurine on a water clock from a 15th century manuscript and is not an image of Saladin.

A Muslim of Kurdish origin,[2][3][4] Saladin led the Muslim opposition to the European Crusaders in the Levant. At the height of his power, his sultanate included Egypt, Syria, Mesopotamia, Hejaz, Yemen and other parts of North Africa.

His father, who worked for the Turkish governor, decided to raise him in Syria where he received his education. Another influential figure in his life was his uncle Shirkuh who was a military leader and later commanded for Saladin during the wars.[5] Many Muslims consider him a hero for defeating the Crusaders over 20 years of battles. The Crusades were series of battles between Christian Europe and Islamic Near East over holy land in what is now known as Palestine. Saladin’s army protected Egypt from the Crusaders in 1168. By taking Egypt, he became Vizier, a high ruler of Egypt. Just before the Caliph died, Saladin was crowned Sultan of Egypt and Syria.[6] His greatest victory was at the Horns of Hattin in July 1187 AD, after which Jerusalem fell to the Muslims (October 1187) and was never again recovered by the Crusaders. He is also remembered for his series of battles and wins and losses against King Richard I of England. These were inconclusive and in the end resulted in a moral victory for Sultan Salah ad-Din, when Richard's Crusade failed and returned to Europe.[7]

He founded the Ayyubid dynasty of Egypt, Syria, Yemen (except for the Northern Mountains), Iraq, Mecca Hejaz and Diyar Bakr. Salah ad-Din is a title which translates to The Righteousness of the Faith from Arabic.

Many books were written about Saladin, the things he did and the battles he won. Daastaan Imaan Farooshoon Ki is one book in Urdu written by Althamash that says very good things about Saladin and compares and contrasts him to other kings and princes, in a favourable light.