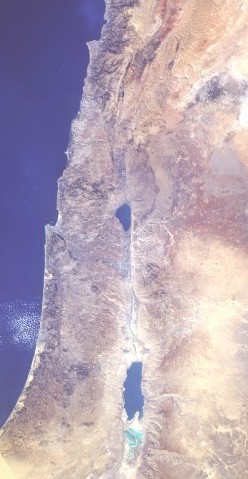 The Jordan River (Hebrew: נהר הירדן nehar hayarden, Arabic: نهر الأردن nahr al-urdun) is a river in Southwest Asia that flows through the Great Rift Valley into the Dead Sea. Many people think it is one of the world's most sacred rivers.

The four rivers join to form the Jordan in northern Israel, near kibbutz Sede Nehemya. The Jordan drops quickly in a 75 kilometer run to Lake Hula, which is a little below sea level in the Galilee sea. Then it drops much more in about 25 kilometers to the Sea of Galilee. The last section has less gradient, and the river begins to twist before it enters the Dead Sea, which is about 400 meters below sea level and has no outlet. Two major tributaries enter this last section from the east: the Yarmouk River and Jabbok River.

In 1964 Israel began operating a dam that takes water from the Sea of Galilee, a major Jordan River water provider, to the national water carrier. Also in 1964 Jordan built a channel that takes water from the Yarmouk River, a main tributary of the Jordan River. This caused great damage to the ecosystem. Syria has also built reservoirs that catch the Yarmouk's waters.

In modern times, 70% to 90% of the waters is used for human purposes and the flow is much smaller. Because of this, and the high evaporation rate of the Dead Sea, the sea is shrinking. All the shallow waters of the southern end of the sea have been drained in modern times, and are now salt flats.

The waters of the Jordan are a very important resource to the dry lands of the area and are a between Lebanon, Syria, Jordan, Israel and the Palestinians.

In the Hebrew Bible, the Jordan is referred to as the source of fertility to a large plain ("Kikkar ha-Yarden"), called "the garden of God" (Genesis 13:10). There is no regular description of the Jordan in the Bible. The New Testament states that John the Baptist baptized Jesus in the Jordan (Matt. 3:13).

Men awaiting baptism in the Jordan River near the Sea of Galilee in Israel- the traditional baptism site of Jesus Christ.

The Jordan is a frequent symbol in folk, gospel, and spiritual music, or in poetic or literary works.

Because the Israelites made a difficult journey from slavery in Egypt to freedom in The Promised Land, the Jordan can be a symbol of freedom. The actual crossing is the final step of the journey, which is then complete. The Jordan also can mean death itself, with the crossing from life into Paradise or Heaven.