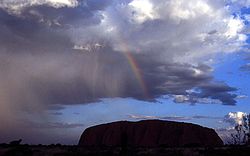 Uluru, sacred to the Aṉangu of central Australia, is one of the oldest-known sacred sites in the world.

A sacred site is a place that is thought of as sacred (or holy) to a particular religion. Every one of the world's major religions has sacred sites. Some religions, such as Islam, think of the sacred sites as being very important to their faith. In other religions such as Protestant Christianity, sacred sites are not so important.

The idea that a place is sacred often comes from something that has happened at the place, or a religious story about that place. Mount Sinai is a sacred site for Jews and Christians because it was on Mount Sinai that Moses received the Ten Commandments of God.

Very often, buildings have been made on natural sites that were already thought of as sacred. For example, a spring of water coming from the ground might be said to have healing powers. A special well-house might be built around the spring to protect it, and as a place where people might leave offerings (gifts to a god).

Other sites are thought of as sacred because a holy person or saint lived there, or died there, or their body is kept there. The Church of the Holy Sepulchre in Jerusalem is one of the most sacred sites to Christianity because it is believed that Jesus' body was placed in a tomb there. The city of Mecca is sacred to all Muslim people as the birthplace of the prophet Muhammad.

Many people make a special visit to a sacred site. This is called a pilgrimage. A person who travels on pilgrimage is called a "pilgrim". Pilgrimage is very important in Islam, because every Muslim person is expected to make a pilgrimage to the city of Mecca once in their lifetime, if they can possibly do so.

Many Christians also make pilgrimages to sacred sites. Pilgrimage became very important in the Middle Ages when thousands of people travelled to many sacred sites, particularly to Jerusalem, to the famous Christian basilicas of Rome, to the Cathedral of Santiago de Compostela in Spain and Canterbury Cathedral in England. In modern times, sacred sites of Christian pilgrimage include Assisi in Italy, Lourdes in France, Fatima in Portugal and the Basilica of Our Lady of Guadalupe in Mexico City.

In Buddhism, the sacred sites are four places in India where Buddha lived and preached. These are Kapilavastu, Bodh Gaya, Benares and Kusinagara.