Muhammad (Arabic: محمد ; c. 570 – 8 June 632 CE)[1] was an Arabian religious and political leader. Muslims believe he was the last prophet of Allah (God). He is believed to be a descendant of Ishmael, a son of Abraham, the seal of all prophets. He is the most important person in the religion of Islam.

Prophet Muhammad was born about 570 CE in Mecca. His father, whose name was Hazrat Abdullah, died a month before prophet Muhammad's birth. His mother, Amina, died when he was three years old, and his foster mother, a Bedouin woman, died when he was six. So, his grandfather, Abd al-Muttalib, took care of him for two years. After his grandfather's death, his uncle Abu Talib took care of him, and was a support to him for many years of his adult life.

Beginning of the Prophethood

In 610 CE, when Muhammad was forty years old, he went for a walk to the mountain of Hira near Mecca. According to Muslims, the angel Jibrail (Gabriel) spoke with him in the cave of the mountain. The story says that when Muhammad first saw the angel Gabriel, he fainted, because Gabriel was so large. This is what Jibrail said to Muhammad: 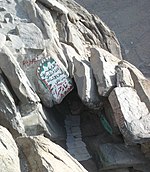 According to Muslim tradition, the mountain of Hira was the place where Jibrail first spoke to Muhammad

Muhammad went back home to his wife Khadijah, and told her what had happened. New revelations came to him commanding him to preach what was being sent down from God. When Muhammad first started teaching, many of the people of Mecca, who worshipped idols, did not like the things that Muhammad said. But there were also people who listened to his preaching and obeyed his messages. These people were the first of the followers of Islam. Leaders of Mecca punished and tortured the followers of Islam. Some followers of Islam were executed. Muhammad resisted this and continued to teach Islam.

After Muhammad finished in Mecca, he took his message to Medina, where some people learned about him and his followers. They welcomed him into their city, and Muhammad wanted them to convert to Islam. They agreed, and many of his followers went to Medina. This movement from Mecca to Medina is called the Hijrah. The Hijra was also the beginning of the Islamic calendar. Muhammad stayed behind until all of his people left Mecca safely.

As Muhammad stayed in Mecca, his uncle Abu Lahab trained seven men to kill Muhammad in his sleep. According to the history, they did not see him leave Mecca. The men went into his house and found his cousin, Ali. Abu Lahab and his horsemen went to the desert to look for him and his friend, Abu Bakr.

His stay in Medina

Muhammad and Abu Bakr arrived in Medina. Some people welcomed Prophet Muhammad to their homes. He used his camel to show everyone where he would build his house. Also, the first mosque of Medina, a small place for prayer, was built in the back of this house.

The people in a strong Jewish tribe in Medina disagreed with the teachings and rules set by Muhammad. This tribe told their allies in Mecca to sell of all the things and homes that Muslims of Mecca left behind. The Muslims and those from Mecca were advised to fight for their property. Prophet Muhammad told them not to do that.

Muslims were called all over Medina to gather at a mosque that Prophet Muhammad prayed in. They were told to fight against the people of Mecca who burned down their homes and stole their property.

The Quraysh pagans of Mecca heard about this, and they sent a larger army numbering 1000 warriors to fight the Muslims. They met in Badr, but the pagans were defeated and Abu Jahl, one of the pagan leaders, was also killed.

But, the Muslims lost the second battle at Uhud. One year after the fight at Badr, the army of Mecca had outside help. Muslim archers failed to listen to Muhammad's instructions and Khalid ibn al-Walid cleverly took advantage of that. Hamza, Muhammad's last uncle, was killed when a slave from Mecca threw a spear into his chest. Muhammad himself was injured.

Then in 627, Abu Sufyan led the Quraysh and its allies to attack Medina itself. However, they could not pass the trench that the Muslims had dug around Medina. After several weeks, the coalition broke up and went home. The Medinians were considered victors.

The truce with Mecca

After the pagans of Mecca failed to gain control of Medina, the Muslims became stronger. The pagans then decided to sign a truce with the Muslims. This means that they would not fight each other for ten years. The Muslims used this as a chance to talk to other people all over Arabia. In three years, many people changed their religions to Islam.

But, this truce did not last for long. After three years of it, a small group of horsemen from Mecca attacked a Muslim camp and killed a few of them. The Muslims in Medina heard of this, and the truce was cancelled. Abu Sufyan, third leader of Mecca in Muhammad's lifetime, tried to resume the truce, but Muhammad politely refused the offer. Muhammad told his followers to be ready to capture Mecca. After Mecca was captured, they went on to capture the Torkan.

The capture of Mecca

In 630, most people in Arabia had become Muslims, and they became part of Muhammad's large army to capture Mecca. Because of the big size of the army, the people of Mecca were afraid to fight back. Abu Sufyan, who was feeling unhappy over the broken truce, went to Muhammad's camp outside Mecca to ask for forgiveness. Muhammad did not say that he would forgive him, so he returned back home. While he was with Muhammad, he changed his religion to Islam by saying the Testimony (al-Ashaada):

The next day, the Muslim army walked towards Mecca. Everyone ran to their homes and closed all doors and windows. They were afraid that the Muslims were going to kill them, because of the bad things they did to the Muslims many years ago. But, the Muslims went towards the Kaaba, believed to be built by Abraham and his elder son, Ishmael. Bilal ibn Ribah, a former Ethiopian slave, shouted out loud to the people of Mecca that they were all safe: "All those who lay down arms are safe. All those in the house of Abu Sufyan are safe. All those behind closed doors are safe."

Abu Sufyan heard this in his home. From this, he learns that Muhammad forgave him. At that time, Muhammad and his followers removed and broke all idols from the Kaaba. The idols were statues that were worshiped as gods. Muhammad forgave all citizens of Mecca. At the end, Bilal climbed to the top of the Kaaba and called for prayer. This was Muhammad's victory in spreading Islam all over Arabia. But, because he was old, he would not live for long.

Masjid al-Nabawi in Medina. Muhammad is believed to be buried at the building with the green dome. It used to be his home when he was alive.

In 632 AD, on June 8, Muhammad became very sick. Before he died, he told his followers about his death. He is buried in the chamber of his wife Aisha (RA) in Medina, where the Masjid al-Nabawi (Mosque of the Prophet) is. In Medina, his friend Abu Bakr went to the Masjid al-Nabawi and shouted to the people:

"If any of you worship Muhammad, you should know that Muhammad is dead. But those of you who worship Allah(swt) (God), let it be known that Allah(swt) (God) is alive and cannot die."[3]

Although Muhammad died, Islam soon spread all over the Middle East. Then, centuries later, it continued till it reached Africa, Asia and Europe. Islam has become one of the world's biggest and fastest growing religions.

Calligraphic rendering of the phrase "peace be upon him", customarily added after Muhammad's name in writing. The phrase is also encoded as a ligature at Unicode codepoint U+FDFA.[4] ﷺ.

In 2005, a Danish newspaper published political cartoons of Muhammad. This led to violent protests in the Arabic world, and elsewhere. More than 100 people died as a result of the protests. Johan Galtung, a Norwegian mathematician and peace activist, tried to help both sides come together and talk about this. According to Galtung, the attacks against Danish institutions ended after the government had invited talks.