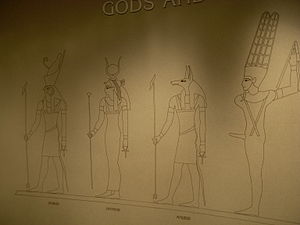 Egyptian gods in the Carnegie Museum of Natural History

Polytheism is well documented in historical religions of classical antiquity, especially those of ancient Greeks and Romans. Other ancient people who were polytheists include German pagans, Ancient Egyptians, the Celts and the Norse.

Usually, a polytheistic religion has a set of stories about the gods. This is called mythology.

The opposite of polytheism is monotheism, which is the belief in only one god, practiced by the monotheistic religions of Judaism, Christianity, Islam, Sikhism, etc.