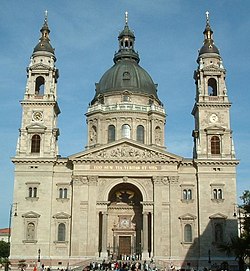 A basilica is a large, important church. The word can also be used for an Ancient Roman building that was used for law and meetings. The word "basilica" is Latin which was taken from the Greek "Basiliké Stoà".

Nowadays the word is used in three ways: 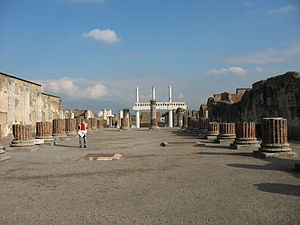 The ruins of the Roman basilica of Pompeii show how it was laid out.

A Roman basilica was a large hall built for meetings, business and law. A Roman basilica usually had the doors at the long sides of the building. At each end was a semi-circular part where the judges sat. The building usually had two rows of columns, which made a high central part and a lower aisle on either side. The light came in from windows above the columns. As the Roman Empire spread, every city had a basilica.

A plan of Old St. Peter's Basilica. Early Christian basilicas were based on Roman basilicas.

Early in the 4th century (312 AD), the Roman Emperor Constantine made Christianity the legal religion of the Roman Empire. The Christians who had been worshipping secretly in private houses now wanted to build churches. They did not want the churches to look the same as Roman Temples. They built them to look more like Roman Basilicas. A basilica was a good plan for a Christian church because lots of people could fit inside, and the aisles were useful for people to move around. The semi-circular part at one end, the apse, was just right to put the altar. Christian basilicas usually have the door at one end, rather than at the side. In front of the door there was often a courtyard called an atrium. Most of these atriums have gone, but churches often have a town square or a market place in front of them.

Some of the oldest Early Christian basilicas were four that were begun in Rome by the Emperor Constantine. Three of them are still standing, but they have had many changes in the last 1,700 years. These are the basilicas of Santa Maria Maggiore, St. John Lateran and St. Paul's outside the Walls. The fourth basilica was 'Old St. Peter's which was replaced in the 16th and 17th centuries by the present St. Peter's Basilica. Other Early Christian Basilicas were built in Greece and the Holy Land.

Nowadays, for a church to be called a Minor Basilica, it has to be given some special privileges or rights by the pope in a document called a "Papal Brief". When a church has been made a basilica, the clergy then carry some special symbols when they are in procession. In 2008 there were more than 1,600 basilicas in the world.

Why do churches become basilicas? 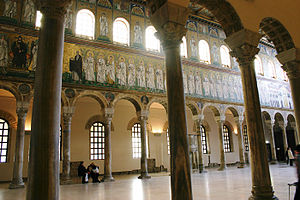 Inside the ancient Basilica of St. Apollinare in Ravenna, (6th century)

The famous Basilica San Marco in Venice has the relics of St. Mark.

The Basilica of St Francis of Assisi was built in memory of a well-loved man who was soon made a saint.

Other ancient basilicas are places where a saint was martyred (put to death). One of these is the Basilica of Saint Stephen, the first Christian Martyr, which is also in Jerusalem. There are many ancient basilicas which were built on the place where a saint was buried. In Rome there are many basilicas like this, because Rome was a very big city, with many Christian people. The Emperors thought Christianity was dangerous to them, because Christians put the rules of Jesus before the law of the Emperor. Many Christians were martyred. When Christianity became legal, churches were built over the graves of martyrs. These churches often became known as basilicas, because they were in the shape of a Roman basilica. Basilicas built over tombs of martyrs include Sant'Agnese outside the Walls, San Lorenzo outside the Walls, and St. Paul's outside the Walls. The words "outside the walls" mean that the burial place of the saint was outside the walls of the city.

Some basilicas are famous because they have "relics" (or bones or perhaps a body part) of a saint. It could also be the case that the relics were reinterred from the original place. If a church housed the body of an important saint, then many people would come on pilgrimage and would dedicate themselves to prayer and the use of the sacraments. Basilicas that have bodies include St. Mark's, Venice, St. Nicholas of Bari, also in Italy, and the Basilica of St. Mary Magdalene in Vezelay, France. Not all relics are bodies. Basilicas may also hold a famous object like a piece of the True Cross, or the belt worn by the Virgin Mary. People often ask whether all these precious relics are authentic. The Roman Catholic Church does not get into arguments about trying to prove whether the pieces of the Cross, the body parts and other things are real. Sometimes the relic is known to be real. Sometimes there is no way to prove it, either way.

Other basilicas are churches that were built by a famous saint, were used by a famous saint, or were built to honour the saint, who did not die as a martyr but lived a very holy life. Two of the most famous basilicas of this sort are the Basilica of St. Francis of Assisi and the Basilica of St. Anthony of Padua. Many thousands of pilgrims go to these churches every day to remember two saints who were gentle, humble and taught people to live better lives.

Some basilicas are built because a miracle or special sign took place. The sign might be a vision and might give a plan to build. The Basilica of Lourdes in France is built at the place where Bernadette Soubirous had a vision of the Virgin Mary. It is an important pilgrimage place. Sometimes the sign is not so strange as a vision. In the Philippines, the Basilica del Santo Niño was built at the place where a partly burnt box was found in 1565. It contained a little statue of the Christ Child and had been left behind by some Spanish or Portuguese explorers many years earlier. "Santo Niño" means "Holy Child" in Spanish.

The four great Basilicas of Rome, as well as having a seat and an altar for the pope, have a Holy Door which is only opened for special occasions such as a Jubilee Year.

The Basilica of Sacre Coeur, Paris 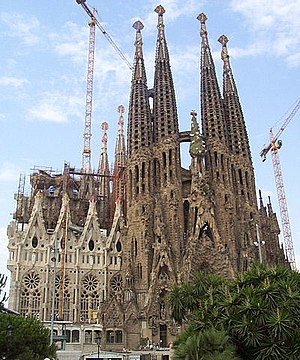 The Basilica of la Sagrada Familia (the Holy Family), Barcelona