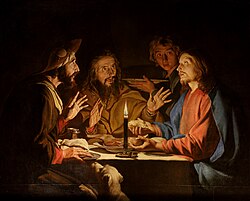 Emmaus is a place in named in the Bible, where Jesus had supper with two followers. These two people met Jesus after his Resurrection. The two disciples walked together on the road. Jesus started walking together with them. But they never recognized Jesus. They started to tell him what happened in Jerusalem, when Jesus was crucified. Jesus continued walking with them until they got to a village called Emmaus. They started eating supper. The two disciples still did not recognize Jesus. But when Jesus blessed the food amnd broke the bread they recognized him. When they did recognize him, he vanished.

That very day two of them were going to a village (one hundred and) sixty stadia away from Jerusalem called Emmaus, and they were speaking about all the things that had occurred. And it happened that while they were speaking and debating, Jesus himself drew near and walked with them, but their eyes were prevented from recognizing him … As they approached the village to which they were going, he gave the impression that he was going on farther. But they urged him, ‘Stay with us, for it is nearly evening and the day is declining.’ So he went in to stay with them. And it happened that, while he was with them at table, he took bread, said the blessing, broke it, and gave it to them. With that their eyes were opened and they recognized him.

The Byzantine Basilica of Emmaus Nicopolis

According to a very ancient Christian tradition, Emmaus is today's Arab village of Amwas, which lies 160 stadia (30 km, 19 miles) to the West of Jerusalem. It can take 6 to 7 hours to come from Jerusalem to Emmaus on foot, if one walks across the mountains of Judea. The place was called Nicopolis during the 3d-7th centuries AD. During Byzantine times, two big Basilicas (churches) where built here with beautiful mosaics and a baptistry (a place for baptism). Many manuscripts of the Gospel of Luke have a shorter distance between Jerusalem and Emmaus: 60 stadia (12 km, 7 miles). It is this distance which is found in modern printed Bibles. During the Crusader and Renaissance times many Christians, traveling to the Holy Land, were looking for Emmaus at the distance of 7 miles from Jerusalem. That's why several villages which lie 12 km away from Jerusalem were thought to be Emmaus. Even today one can find three Emmaus in the Holy Land: Emmaus Nicopolis, Qubeibe and Abu-Gosh!