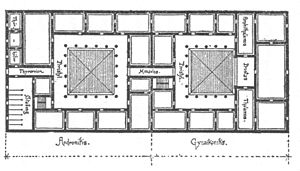 A Greek house plan, as described by Vitruvius

Vitruvius (probably Marcus Vitruvius Pollio) was an Ancient Roman architect and engineer who lived in the 1st century BC. Neither his name, Marcus, nor his cognomen Pollio are certain. His main work is called De architectura (About architecture). There are ten books in it. He was probably born between 80 and 70 BC in Campania, and died after 15 BC.