A rough Dead Sea, with salt deposits on cliffs. 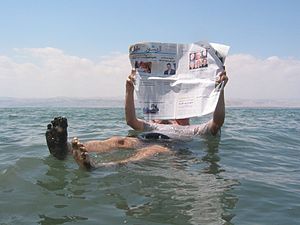 Reading a newspaper while floating in the Dead Sea

The Dead Sea is a lake between the countries of Israel, Jordan and Palestine. At 418 metres (1,371 feet) below sea level, it is the lowest point on the surface of the Earth.[4]

The Dead sea is almost nine times as salty as the ocean.[5] That makes it impossible for most life to exist in it. This is the reason for its name. However, it is not completely dead, because some types of bacteria are able to live in the water.

Because the water is so salty, it weighs more than fresh water. That lets people float in the Dead Sea without any effort. Tourists come from around the world to float in the water.