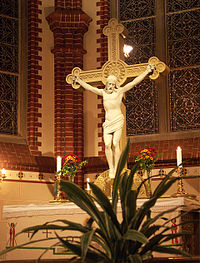 Crucifix inside Eslöv Church, Church of Sweden Diocese of Lund

Jesus, who many Christians believe is God the Son and their Messiah, was crucified (nailed to a large wooden cross). This was a commonly used method for killing people in Roman times.

Christians believe that Jesus' death made the sins of all humans who trust in him, go away, and that they are forgiven. They also believe that Jesus was resurrected (came back to life) after three days. Because of this, the cross is a symbol for Jesus' sacrifice and suffering, but also a symbol of hope, forgiveness of sins, and victory over death.

A cross with the body of Jesus on it is called a Crucifix.

The empty cross is usually favoured by Protestants and Eastern Orthodox, and the symbol reminds them of the Resurrection of Jesus, though the Orthodox will add a slanted footbar, as well. The crucifix is favoured by Catholic churches and is a reminder of Christ's sacrifice. Jehovah's Witnesses believe that Jesus died on a simple upright pole, a "torture stake" ; and only display it as a picture of an impaled Jesus in their literature.

Christians remember the death of Jesus on the cross on Good Friday every year.

The most common cross is the Latin Cross. The cross represents and memorializes Christ's death.

This cross is a symbol of hope over death, and of victory in returning to life. (See Philippians 2:8-9)