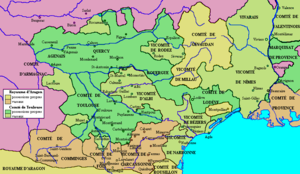 Political map of Languedoc on the eve of the Albigensian Crusade

The Albigensian Crusade or Cathar Crusade (1209–1229) was a 20-year military campaign. It was initiated by the Roman Catholic Church to eliminate the Cathar heresy in Languedoc. The Crusade was prosecuted by the French and resulted in a reduction in the number of practicing Cathars. It also resulted in a realignment of Occitania, bringing it into the sphere of the French crown.