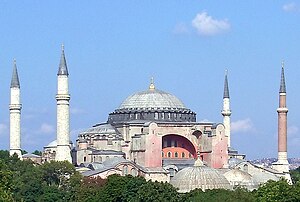 Hagia Sophia, was an early Christian church [1][2] and later an Eastern Orthodox church. It was made into a mosque in 1453 by the Turks [1] and changed into a museum in 1935. It is in Istanbul, Turkey. It is often said to be one of the greatest, and most beautiful buildings in history. Hagia Sophia was rebuilt by Trdat the Architect, an Armenian who was sent by Byzantine officials, after a big earthquake hit the area.