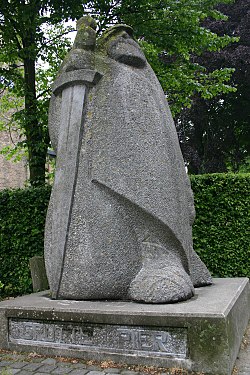 Statue of Grutte Pier in his hometown of Kimswerd. The line of text on the foot of the statue simply reads in Friese "Grutte Pier".

Pier Gerlofs Donia, 1480 - 1520. He fought for the independence of Friesland (which is now part of the Netherlands). He was an enormous man and was said to be well over 7 feet tall. Donia was also known as Grutte Pier, which means "Big Lad", in Frisian language, or Grote Pier, which means the same in Dutch language. He also was a pirate. This great man fought against the people from Holland, Germany, and the Burgundians. In his biggest battle at sea he captured 28 ships, and he killed all 500 men who had been taken prisoner. "Big Lad" was then called the Cross of the Dutchman.

According to legend, Pier forced his captives to repeat a shibboleth to show which people were Frisians and who were Dutch and Low Germans:

Or, in English translation:

Butter, rye-bread, and young cheese: whoever cannot say that is not a true Frisian.

Those prisoners who could not answer this in proper Frisian had their heads cut off by Donia himself. Pier was also noted for his ability to behead several people with a single blow. This meant he could kill many enemies at the same time during battle, and gave him an excellent advantage over his opponents. His famous fighting skills proved their worth in many battles.

Despite his many successes, Pier could not defeat the Burgundian/Hapsburg armies. He retired disillusioned in 1519. He died peacefully in bed in the Frisian town of Sneek on October 28 in the year 1520. His last words were spoken to his life-time enemy, the count of Nychlenborch. He was asked by the count were he wanted to go after he died, to which Pier replied "Nea myn Heer ta" ("To my Lord"). He then died. After the Giant of Kimswerd (another nickname) died, Friesland never again earned its freedom. It has remained a province of the Netherlands.