Not to be confused with Scottish Gaelic language, Scottish English, or Scottish people.

Scots is a West Germanic language. It is sometimes called Lowland Scots or Lallans. It is not Scottish English but it is similar to English that is spoken in Scotland.[4][5] Ulster Scots is a form of Scots found in the north of Ireland. Scots is very different from the Scottish Gaelic language, which is a Celtic language.

There have been disagreements about the linguistic, historical and social status of Scots. Focused broad Scots is at one end of a scale, with Scottish Standard English at the other.[6][7] Scots is generally regarded as one of the ancient varieties of English, and has its own distinct variants[6] such as Doric. 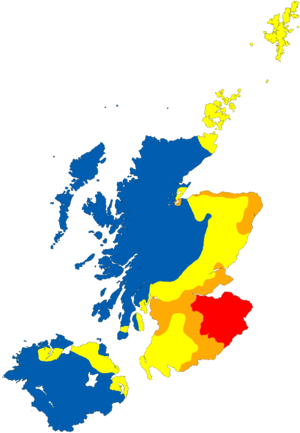 Northumbrian Old English was established in what is now southeastern Scotland as far as the River Forth by the seventh century. The region was part of the Anglo-Saxon kingdom of Northumbria.[8] Early Scots began to diverge from Northumbrian English in the twelfth and thirteenth century. There was immigration of Scandinavian-influenced Middle English-speakers from the North and Midlands of England.[9]

Later influences on the development of Scots were from Romance languages via ecclesiastical and legal Latin, Norman[10] and later Parisian French from the Auld Alliance and Dutch and Middle Low German influences by trade and immigration from the Low Countries.[11] Scots also includes loanwords from contact with Gaelic.

From the 13th century, Early Scots spread further into Scotland through the burghs established by King David I. The growth in prestige of Early Scots in the 14th century and the decline of French in Scotland made Scots the prestige dialect in most of eastern Scotland.[12]

From 1610 to the 1690s, during the Plantation of Ulster, many Scots-speaking Lowlanders, about 200,000, settled there.[13] In the core areas of Scots settlement, there were five or six times as many Scots as English settlers.[14] Southern Modern English was adopted as the literary language after 1700, and "Modern Scots" is sometimes used to describe the spoken language after 1700.