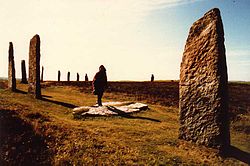 The Ring of Brodgar

Heart of Neolithic Orkney refers to a group of Neolithic monuments found on Mainland, one of the islands of Orkney, Scotland. The name was adopted by UNESCO when it proclaimed these sites as a World Heritage Site in 1999.[1]

There are five sites on Mainland: