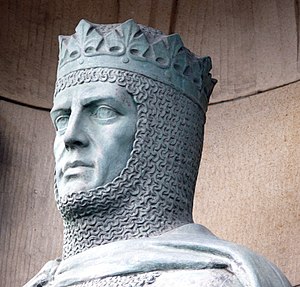 Statue of Robert the Bruce.

The Treaty of Northampton signed in 1328 was an agreement between England and Scotland that recognised Scotland as an independent country and Robert the Bruce as its king.[1] Edward I of England and his son Edward II had been fighting wars against Robert the Bruce for more than 20 years. Edward II believed that he was the rightful King of Scotland. In 1327, Edward II was forced from his throne by his wife, Isabella of France and her lover, Roger Mortimer. Edward's young son, Edward III became King of England at the age of 15.[2] Robert the Bruce saw a chance in the confusion in England and immediately sent James Douglas to attack the north of England. The English, scared that they would lose, wanted a peace treaty.[1] The Treaty of Northampton secured peace between the two countries. As part of the treaty, Edward II's six year old daughter, Joan of the Tower was married to Robert's four year old son, David II.[1]