The crown of King Louis XV of France. Crowns are a popular symbol of the office of a monarch

A monarchy is a kind of government where a monarch, a kind of hereditary ruler (someone who inherits their office), is the head of state. Monarchs usually rule until they die or resign (when a monarch resigns it is called abdication). Most monarchies are hereditary, but some are elected. The most famous elected monarch is the Pope of the Roman Catholic Church. Some well known titles for monarchs are King, Queen, Emperor, Empress, Czar, Kaiser, Shah, Emir and Sultan. 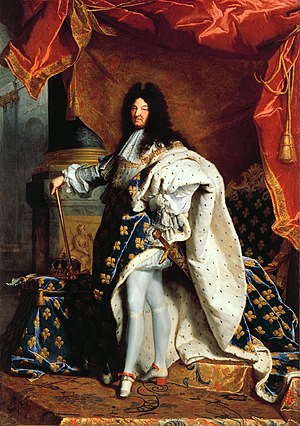 The official portrait of Louis XIV of France. Hyacinthe Rigaud painted it around the year 1700. The portrait shows Louis with all signs of power. His was King of France by the grace of God. Several absolute monarchs who had their portraits made wanted them to be close to this picture

Monarchy is one of the oldest kinds of government. Most historians agree that the first monarchies were tribes or small groups of people who decided to let a war-chief or other leader pass on their office to their children. Over time, the rules for deciding who got to become the next monarch became more complicated. In general, the oldest son or, in some countries, daughter, gets to become the next monarch when the old one dies. Kings and other kinds of monarchs have been around for many thousands of years, there are many, for example, mentioned in the Bible as well as ancient historical records. Three of the oldest countries with monarchs that still hold office are the United Kingdom,where the present line of Kings and Queens has been around for nearly 1,000 years, Denmark where the royal line has remained unbroken for almost 1,200 years, and Japan, which has records showing a line of Emperors dating back even farther.

Many monarchs today perform mostly the ceremonial jobs of a head of state, while the head of government, who is usually elected, passes and enforces laws. It is also very important in other parts of the country.

In an absolute monarchy the monarch is the only source of all laws and the monarch can make any law they want just by deciding it. Any other institution in the country cannot make laws that affect the monarch, unless the monarch decides to allow it. Sometimes the monarch is also the head of the state religion and makes religious laws also. All land and property in the country can be taken or given away by the monarch at any time for any reason. The army and navy is under the personal control of the monarch and can be used for any purpose at any time. The monarch can also pick who gets to be the next monarch and can change the rules at any time. There is usually no elected government or Parliament, and if there is one, it has no real power. This kind of government is very rare today. The people do not have a lot of power in it.

Countries that are examples of an absolute monarchy are Vatican City, Brunei, Qatar, Saudi Arabia, Oman and Swaziland. 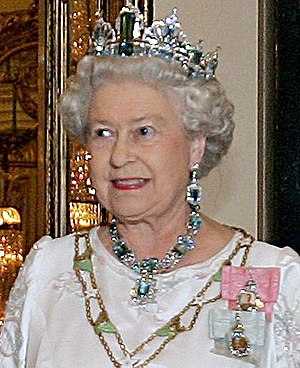 Queen Elizabeth II of the Commonwealth realms, a constitutional monarch

A constitutional monarchy is a form of government that is usually a democracy and has a constitution, with the monarch as head of state. Either the monarch has to obey the laws like everyone else, or, if the monarch does not have to obey the same laws as the rest of the people, there are special laws that say what the monarch can and cannot do. The monarch usually can not decide their special laws on their own. There may be laws about who the monarch's children can marry, for example, that are passed by the Parliament or Congress. For example, in the Netherlands, if a member of the royal family marries without the permission of Parliament, they cannot become king or queen themselves. The army and navy may swear an oath to the monarch, but the real power to control it is given to the elected government. There are laws about property and succession (who gets to be the next monarch) that can only be changed by the elected government. Usually the monarch must sign laws into effect, but they are required to follow the will of the elected government.

A constitutional monarchy usually has separation of power, and the monarch often has only ceremonial functions, such as representing the country while traveling or acting as a symbol for the whole country (not for a particular political party). Constitutional monarchs usually do not vote, even when it is legal for them to do so. Voting would mean that they picked a side in political arguments and then could not claim to represent everyone in the country. Some constitutional monarchies give the power to veto laws to the monarch, but in most countries where this is the case it is a power that is very rarely used. In countries where the monarch can dismiss or appoint governments, this is usually only done to make sure that the democratic process is respected, without taking sides in politics. Appointments to public office made by constitutional monarchs are generally approved by the democratically elected government beforehand.

Examples of Constitutional monarchies are the United Kingdom, New Zealand, Australia, The Netherlands, Norway, Denmark, Sweden, Belgium, Japan and Spain. Thailand has a monarch who sometimes take part in politics to influence the government unlike in other constitutional monarchies, but he/she still is subject to law.

An important part of a monarch focuses on national identity, unity and pride. They give a sense of stability and continuity over a countries history. Monarchs also officially recognize special achievements and excellence. They often support and focus on doing voluntary service to help those in need and serve as role models.

Today, there are three basic ways a new monarch is chosen after the death of the old one, or because the old monarch has left power:

Of these three, the order of succession method is the most common. Countries where the monarchs are elected include Malaysia, Cambodia, United Arab Emirates, Andorra, and Vatican City.