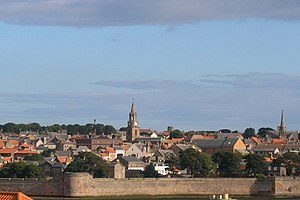 Berwick-upon-Tweed is a town in Northumberland, United Kingdom. It is the most northerly town in England, and is 2 miles from Scotland. Around 15,000 people live in Berwick.[1] Many people visit Berwick because it is a nearby market town.

Berwick used to be a Scottish town and a very important port. The town's ownership has changed more than 12 times. In 1482, the English took Berwick and never lost it again.[1][2] Today, many Scottish people live in Berwick.

The Scottish county called Berwickshire is named after Berwick.