The Wars of Scottish Independence were a series of military campaigns fought between Scotland and England in the late 13th and early 14th centuries.

The wars were part of a great national crisis for Scotland and the period became one of the most important moments in the nation's history. At the end of both wars, Scotland still was a free and independent nation, which was her main aim throughout the conflict. The wars were also important for other reasons, such as the emergence of the longbow as a key weapon in mediaeval warfare. 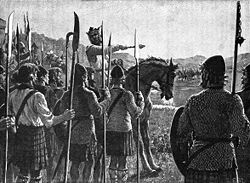 Robert the Bruce talking to his troops. Illustration from Cassell's History of England, 1902

The Battle of Bannockburn (23–24 June 1314) was an important Scottish victory. It was the decisive battle in the First War of Scottish Independence. In this battle, the Scottish king Robert the Bruce defeated the English king Edward II.