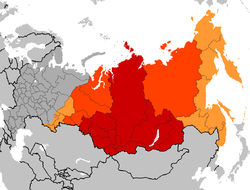 Siberia is the part of Russia that is in Asia. It covers wide landscapes, and stretches from the Ural Mountains to the Pacific. It goes from the Arctic Ocean to the border with China, Kazakhstan, and Mongolia. The Yenisei river is sometimes called the border between east Siberia and west Siberia. Siberia covers about 77% of all Russian territory, but only 28% of Russians live there. It is one of the coldest places on Earth where people live. 70% of people in Siberia live in big cities and small towns.

Novosibirsk is the largest city in Siberia, with a population more than 1.5 million. Omsk and Krasnoyarsk also have populations of over a million people. Big cities, Yekaterinburg (almost 1.5 million) and Chelyabinsk (almost 1.2 million), are in Northern Asia, but not in the Siberian Federal District.

Many different ethnic groups live in Siberia. They are sometimes called Sibiryak (Russian: сибиряк) or Sybirak (Russian: сыбирак, from Polish) people. Most people in Siberia who are not Slavic, are Turkic peoples. The first Slavic settlers, from European Russia, arrived in the 17th century.