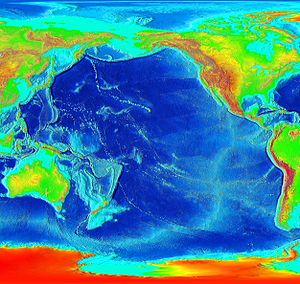 A map of the Pacific Ocean. It is ringed by many volcanoes and oceanic trenches.

The Pacific Ocean is the body of water between Asia and Australia in the west, the Americas in the east, the Southern Ocean to the south, and the Arctic Ocean to the north. It is the largest named ocean and it covers one-third of the surface of the entire world. It joins the Atlantic Ocean at a line drawn south from Cape Horn, Chile/Argentina to Antarctica, and joins the Indian Ocean at a line drawn south from Tasmania, Australia to Antarctica.

As the Atlantic slowly gets wider, the Pacific is slowly shrinking. It does this by folding the sea floor in towards the centre of the Earth - this is called subduction. This bumping and grinding is hard so there are many earthquakes and volcanoes when the pressure builds up and is quickly released as large explosions of hot rocks and dust. When an earthquake happens under the sea, the quick jerk causes a tsunami. This is why tsunamis are more common around the edge of the Pacific than anywhere else. Many of the Earth's volcanoes are either islands in the Pacific, or are on continents within a few hundred kilometers of the ocean's edge. Plate tectonics are another reason which makes Pacific Ocean smaller.