During the Chinese Qing Dynasty, Tuva was part of the province of Mongolia. From 1921 to 1944, Tuva was a separate country called Tannu-Tuva. In 1944, it joined the Soviet Union. In 1991, it continued to be part of Russia after the breakup of the Soviet Union. 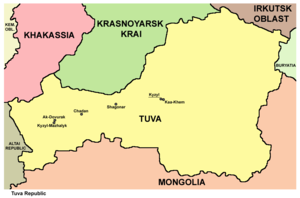 Tuva is in a mountain basin between the Sayan Mountains and the Tannu-Ola Mountains. In the east, Tuva has forests. In the west, the land is drier.

Tuva's population at the end of the Soviet Union stayed about the same for some time, according to data.[6] It is currently increasing again. A little bit more than half of the population live in cities and towns. Most of the people that live in cities and towns live in Kyzyl. Ethnic Tuvans make up the most of the population. Most ethnic Tuvans practice a religion that is mixed with Tibetan Buddhism and Shamanism, which is a belief that worships spirits and nature.

Before they joined the Soviet Union, Tuvans were nomadic people. They traveled on horses. Therefore, horses were very important in Tuvan culture. Tuvan art often shows horses. And many Tuvan songs are about horses. Tuvans lived in yurts (round, felt covered houses that are easy to take apart and carry). Even today, a few Tuvans are nomads. Ethnically they are Mongols.

Tannu-Tuva was also famous for its colorful and unusual postage stamps. Some were triangles. Many showed interesting pictures of life in Tuva.