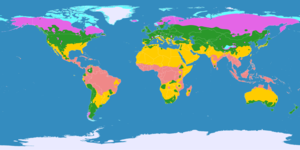 The temperate parts of the world are green

In geography, temperate latitudes of the Earth lie between the subtropics and the polar circles.[1] Average yearly temperatures in these regions are not extreme, not burning hot nor freezing cold. Temperate means moderate.