The European Union (abbreviation: EU) is a confederation of 27 member countries in Europe established by the Maastricht Treaty in 1992-1993. The EU grew out of the European Economic Community (EEC) which was established by the Treaties of Rome in 1957. It has created a common economic area with Europe-wide laws allowing the citizens of EU countries to move and trade in other EU countries almost the same as they do in their own. Nineteen of these countries also share the same type of money: the euro.

The name of Europe comes from the Latin Europa, which in turn derives from the Greek Εὐρώπη, from εὐρύς eurys "wide" and ὤψ ops "face".[11]

The objective of the EU is to bring its member states closer together with respect of human rights and democracy. It does this with a common style of passport, common rules about fair trading with each other, common agreements about law enforcement, and other agreements. Most members share a common currency (the euro) and most allow people to travel from one country to another without having to show a passport.

Quai d'Orsay (Paris). Robert Schuman gave the speech starting the plan for a European Coal and Steel Community in 1950

After World War II, the countries in Europe wanted to live peacefully together and help one another's economies. Instead of fighting each other for coal and steel, the first member countries (West) Germany, France, Italy, Belgium, Netherlands, and Luxembourg created one European Coal and Steel Community in 1952.

In 1957 in the Italian city of Rome, the member countries signed another treaty and made the European Economic Community. Now it was a community for coal, steel and for trade. Later it changed the name to the European Community.

In 1993, with the Treaty of Maastricht it changed its name to the European Union. Now the member countries work together not only in politics and economy (coal, steel and trade), but also in money, justice (laws), and foreign affairs. With the Schengen Agreement, 22 member countries of the EU opened their borders to each other, so people can now travel from one country to the other without a passport or identity card. Many of the countries of the EU also share a currency, which is called the euro. 10 new countries became members of the EU in 2004, 2 more became members in 2007, and 1 more in 2013. In 2016, the United Kingdom voted to leave the EU. Today there are 27 member countries altogether.

A person who is a citizen of the European Union can live and work in any of the 27 member states without needing a work permit or visa. For example, a French person can move to Greece to work there, or just to live there, and he or she does not need permission from an authority in Greece.

In the same way, products made in one member country can be sold in any other member country without any special permissions or extra taxes. For this reason, the members agree rules on product safety - they want to know that a product made in another country will be as safe as it would be if it had been made in their own.

Council of the European Union 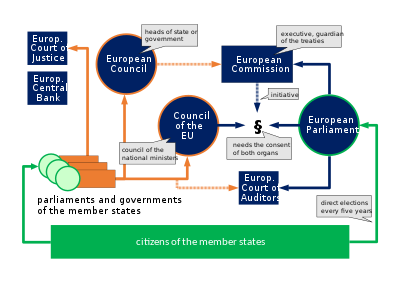 Political system of the European Union. The union has seven organs (in blue).

The Council of the European Union is the main decision-making group. The cabinet ministers of the member countries meet (Ministers for Foreign affairs, for Agriculture, for Justice, etc...) and discuss issues that are important to them.

Member countries with a large population (Germany, France, United Kingdom, etc.) have more votes than countries with small populations (Luxembourg, Malta, etc.) but a decision cannot be made if enough countries vote against the decision.

Twice a year, the heads of government (Prime Ministers) and/or the heads of state (Presidents) meet to talk about the main issues and make decisions on different issues. This meeting is different and not as formal. It is known as a European Council.

Note: This is not the same thing as the Council of Europe, which is not part of the European Union.

The European Commission runs the day-to-day running of the EU and writes laws, like a government. Laws written by the Commission are discussed and changed by the European Parliament and the Council of the European Union.

The Commission operates like a cabinet government. There is one Commissioner per member state, though Commissioners are bound to represent the interests of the EU as a whole rather than their home state. 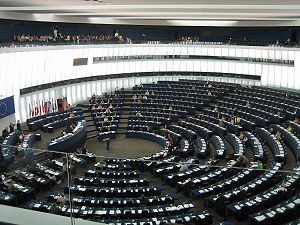 The Parliament is the only directly elected body
Main page: European Parliament

There are many discussions in the EU about how it should develop and change in the future.

The main reasons why European countries came together are political and economic:

In 1951, six countries made the European Coal and Steel Community, a basic version of what the EU is now. These six then went further and in 1957 they made the European Economic Community and the European Coal and Steel Community. The UK and others decided not to join, and then when the UK changed its mind it was stopped from joining by French President Charles de Gaulle. When he was no longer President, the UK and others started to join. Today there are 27 members but the idea that more should join is not seen as a good one by everyone.

Serbia, Montenegro, North Macedonia, Turkey and Iceland are "candidate countries"; they are being considered for membership. Albania, Bosnia and Herzegovina and Kosovo are expected to follow.

However, since there have been many political problems happening in Turkey recently, especially with President Edrogan's arresting of tens of thousands of political rivals since the failed coup attempt on July 15, 2016, it is unlikely that it would be allowed to part of the EU anytime soon because EU members believe that the current Turkish government is not respecting human rights, rule of law, or democracy.[17]

United in diversity (or together with many types of people in Simple English), is the motto of the European Union.

The motto in other languages:[18]

The government of the UK invoked "Article 50" of the Treaty of European Union (the Treaty of Lisbon) on 29 March 2017.[20] This began negotiations with fellow members of the EU on the terms of exit. The timetable for these negotiations is two years, which meant that the UK would remain a member of the EU until at least March 2019. However this deadline was later extended to October 31st 2019 at the request of the British Government. The United Kingdom left the European Union on the 31 of January 2020 at 23:00 (Greenwich Mean Time). Following the UK left from the European Union on January 31, the transition period expired on December 31, 2020 and ended on January 1, 2021.