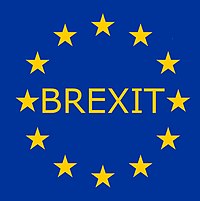 Brexit (/ˈbrɛksɪtˈbrɛɡzɪt/) is a movement that promotes that the United Kingdom (UK) leave the European Union (EU). The name "Brexit" is a portmanteau (merging two words together) of "British" and "exit".

On 15 January 2019, Theresa May's government was defeated in the House of Commons by 230 votes in a vote on her deal to leave the European Union.[3]

Below is a timeline of major events relating to Brexit.[4]